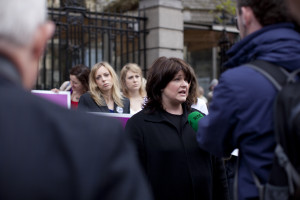 The Pro Life Campaign has attacked the Irish Times newspaper saying its recent apology over a misleading story on abortion is “inadequate” and “raises major credibility issues” for the newspaper.

In a statement, PLC spokesperson, Caroline Simons said, “The revelation that the front-page story, which was picked up by the international media, never happened, is extraordinary.”

“It raises many serious questions, given that representatives of the National Maternity Hospital commented on the case. An apology for this extraordinary report seems inadequate and the public deserves a fuller explanation of how it came about”, she said.

On 23 August, the Irish Times ran a front page story claiming that the first abortion under the new legislation had taken place. The newspaper claimed the abortion of twins saved the mother’s life and was carried out at the National Maternity Hospital in Holles Street.

Last Saturday, the Irish Times issued an apology on page seven of its news section pointing out that “the case described in the article did not happen.”

Clinical Director of Holles Street, Dr Peter Boylan, described the report as “outrageous” and said it was “absolutely unacceptable for patient details to be splashed around the front page of the newspaper.”

An investigation is to be carried out within Holles Street to establish the source of the story.

Responding to the Irish Times’ apology, Dr Ruth Cullen of the Pro Life Campaign said, “This latest episode raises major credibility issues for the Irish Times. It also rushed to judgment following the tragic death of Savita Halappanavar by concluding that Ireland’s abortion laws were to blame.”

“Despite the findings at the coroner’s inquest, the Irish Times has refused to change its tune,” she continued. Dr Cullen also accused the newspaper of “countless other recent examples of biased reporting on abortion”.

“This would not be a problem if it were not for the fact that some of our weaker minded politicians have taken their direction on the issue from newspapers like the Irish Times, instead of robustly challenging the obvious agenda that is being pushed,” the PLC spokeswoman said.

“The headline and content of the recent report in The Irish Times was clearly intended to create the impression that the new abortion law was needed to save women’s lives. Not surprisingly, that’s how the international media interpreted the report. For the Irish Times to print its apology on page seven of the paper only adds insult to injury,” Dr Cullen said.

Meanwhile, solicitor Simon McGarr told Matt Cooper on The Last Word radio programme on Monday that “The Press Council of Ireland has a Code of Practice and this states that if there is a retraction, a correction, or a clarification that has to be published, it should be given due prominence.”

He added, that it also states that “an apology for a front page article should be published within the first four pages of the publication.”