Irish seminarians to serve at Easter Vigil with Pope 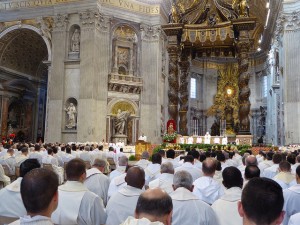 Seminarians from the Pontifical Irish College in Rome have been invited to serve at the Easter Vigil in St Peter’s Basilica which will be celebrated by Pope Francis on Holy Saturday night.

Founded in 1628, this is the last of the many Irish Colleges that were once dotted around Europe when it was not possible to educate priests in Ireland.

Today the College has seminarians from a number of Irish dioceses along with priests from around the world doing postgraduate studies in Rome.

The Pontifical Irish College has a full-time staff of four priests who look after the formation of seminarians in four key areas: human, spiritual, pastoral and intellectual.

Last week, the Irish College in Rome announced the appointment of a priest from the diocese of Limerick as its new vice rector.

Fr Paul Finnerty has served as Limerick diocesan secretary for the past 12 years, and will take up his new post this June.

The Easter vigil ceremony can be watched live on EWTN Television or on the internet on the Vatican Television livestream from 19.30 Irish time – https://www.youtube.com/watch?v=86SemtwG6Lc