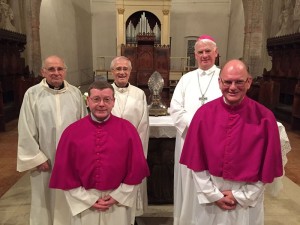 Fr Joseph Gunn, parish priest of Bangor, and Fr Joseph Rooney, Judicial Vicar of the Diocese of Down and Connor, following their investiture as honorary Canons of the Co-Cathedral of Bobbio.

Two priests from the Diocese of Down and Connor were recently invested as canons in the Italian city where St Columbanus died 1,400 years ago in 615AD.

Last Saturday, the eve of the 18th annual celebration of St Columban’s Day, at a prayer vigil in Bobbio’s Co-cathedral, Fr Joseph Gunn, parish priest of Bangor, and Fr Joseph Rooney, judicial vicar of the Diocese of Down and Connor, were invested as honorary Canons of the Co-Cathedral by the Bishop of Piacenza-Bobbio, the Most Reverend Gianni Ambrosio.

The ceremony was attended by pilgrims from Australia, New Zealand and Hong Kong as well as a number of European countries.

The investiture of the two Irish priests highlights the religious heritage shared by the people of both Down and Connor and Piacenza-Bobbio.

It is also an invitation to all Christians in Ireland and particularly in Bangor to rediscover the living tradition of Columbanus, a religious, monastic and cultural figure of significance who preceded both the schism between the Churches of East and West and the 16th century Reformation.

In a civic ceremony on Sunday 30 August, in the presence of mayors from towns associated with St Columbanus and the Ambassador of Ireland to the Holy See, Emma Madigan, Bishop Noel Treanor was conferred with the honorary citizenship of Bobbio by its mayor, Roberto Pasquali.

These events took place within the broader context of a Diocesan pilgrimage led by Bishop Noel Treanor which left Ireland on 24 August and which visited the sites associated with St Columbanus.

These included:
– The beautiful Abbey and cloister at Luxeuil with the statue of Columbanus by Claude Grange in front of Luxeuil Abbey.
– The excavations of the original Columban monastery at Annegray.
– The picturesque town of St Gallen in Switzerland and the Abbey of St Gall which contains the relics of St Columbanus.
– The Austrian town of Bregenz on Lake Constance, where Columbanus founded a monastic community and where there is a modern parish in Bregenz dedicated to St Columbanus.
– The historic centre of Piacenza and its Cathedral.
– The remains of the Abbey at Bobbio, the last foundation of the Irish Saint.
– They also participated in the 2015 St Columban Day events in Bobbio, an annual occasion when international associations of St Columbanus come together.

Cardinal Angelo Scola, Bishop Gianni Ambosio (Diocese of Piacenza-Bobbio) and Bishop Noel Treanor (Diocese of Down and Connor) were the papal delegates for the 18th Annual Celebration of St Columban’s Day.

The first Columban foundation on the continent is believed to have been at Annegray, a few miles from Luxeuil.

Archaeological excavations have uncovered the foundations of the original abbey.

With the increasing number of monks, Columbanus moved eight miles westward to the Roman ruins at Luxeuil, where he made his most influential foundation.

Under the intellectual and spiritual stimulation of the Irish monks, the abbey dedicated to St Peter soon became the most important monastery in Gaul.

From here, dozens of missionaries went forth to found abbeys in territories that now comprise France, Austria, Switzerland and Germany.

Bobbio Abbey was founded in the valley of the Trebbia River by Columbanus in 614. The town of Bobbio, which later grew up around the Abbey, is today a peaceful and beautiful village of the province of Piacenza, about a two hour drive from Genoa.

The Abbey was home to one of the greatest libraries in the Middle Ages.

The immediate backdrop to the foundation of the abbey was the Lombard invasion of Italy in 568.

The Lombard king Agilulf married the devout Roman Catholic Theodelinda in 590. Under her influence and that of Columbanus, the king was converted to Christianity.

As a base from which he could undertake the conversion of the Lombard people, the Irish monk was given a ruined church and lands which had once formed part of the lands of the papacy.

Columbanus particularly wanted this secluded place. Though enthusiastic in his evangelisation of the Lombards, he preferred solitude for his monks and himself. It was here that St Columbanus died in 615.

His remains lie in a beautiful sarcophagus in the crypt of the Abbey Church.