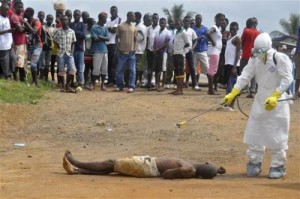 Having left Sierra Leone in July this year, I was a little apprehensive heading back from Ireland last week to Kenema, the town which was the initial epicentre of the current Ebola outbreak.

The constant and harrowing media coverage at home was greater than the coverage given to the brutal civil war in Sierra Leone.

Travelling back via Brussels, Dakar and Conakry, I was one of about 100 passengers who got off in Lungi airport which is some distance from Freetown, the Sierra Leonean capital.

There was no sense of panic at the airport. We were very politely asked to wash our hands in chlorinated water before entering Arrivals.

Apart from the usual landing card, we also had to fill out a medical form stating such things as where we boarded the airplane.

After the regular immigration checks, we formed another line for the ‘health desk’. My medical form was quickly checked and my temperature taken with a pistol-like, small thermometer held close to the head.

As there is a nightly curfew from 7pm, my first night back was in the retreat house of the Clarissian Sisters in Lungi.

Interestingly, Lungi town has to date had no reported case of Ebola; people were moving around the town quite normally, traders were sitting at their stalls, and a few bars even appeared to be open for business.

Next morning, after breakfast, two others and myself set off for Kenema, usually a five and a half-hour trip.

The first health check we met was just outside the town of Port Loko which is quarantined having been badly hit by Ebola.

At the next check the medical attendant came to the vehicle and took our temperatures while we were still sitting inside.

The two police/army checkpoints along this stretch of road waved us through. With fewer vehicles on the road and no delays at any of the five additional health checks before the town of Bo, we moved quickly.

On the road to Bo we passed by Moyamba Junction – a lively market place along the main road and a place where public transport stops for refreshments or to buy goods. It is always bustling, and market women – armed with trays of food and fruit – usually surround any vehicle that stops.

This town has been quarantined for the past month or so. The market was deserted and we saw just a few people strolling around. Because of the quarantine, vehicles are not currently allowed to stop here.

It was getting close to 1pm by the time we reached Bo. We stopped for lunch – a plate of groundnut stew. Bo looked unbelievably normal. Ebola cases have been confirmed here but not in sufficient numbers to warrant a lockdown of the town.

The okadas (motorcycle taxis) seem to be thriving and people were going about their daily chores. Shops, petrol stations, bars and restaurants – even a few hairdressing/barber shops – were open!

The forty miles from Bo to Kenema were a little more testing. I counted seven check-points on that stretch of road; the most demanding was just outside Kenema itself where we were asked for our travel passes.

The authorities continue to be very strict on people moving into and out of Kenema.

We finally arrived at the Pastoral Centre in Kenema which was built in the 1970s and whose first director was the late Ray Barry CSSp.

An international team of thirty volunteer Red Cross workers is currently staying there. Led by the Spanish Red Cross, many of the team-members are Nordic with others from countries including Australia, Canada, Spain and the UK.

The Red Cross has established a field hospital at Mano Junction, which is about 15 miles east of Kenema, but also works at the government hospital in Kenema.

As Freetown is still very badly affected by Ebola and as the agencies are finding it difficult to cope with the large numbers of new cases, some patients are transported from Freetown to Kenema or Mano Junction hospitals.

The presence of the Red Cross is having an obvious impact and the good news is that there have been no new cases of Ebola diagnosed in Kenema district for the past four days.

Talking to the doctors and nurses they will quickly tell you that they find the work very difficult and stressful.

The Ebola suits that they must wear are very light but extremely hot, particularly in a tropical climate.

They can only work in them for about 45 minutes at a time. They generally work a 10-hour day at the hospital (7 days a week) and then they have a team meeting every evening before supper.

Medical personnel, who have regular contact with Ebola patients, are typically on assignment for about a month.

Not all doctors complete their one-month stint; recently one doctor took ill and had a very high temperature. Fortunately, it was quickly diagnosed as no worse than heat stroke and the doctor was allowed home on the next flight.

The medical camp is divided into three sections: one section for new arrivals and those suspected of having Ebola; a treatment centre for confirmed cases; a section for recovering patients who have to remain under observation for three weeks.

The Red Cross recently opened an ‘Ebola kindergarten’ for the children of patients in the hospital.

Kenema itself looks very normal. Life has not come to a standstill. I was able to get my internet connection up and running and my mobile phone re-registered. Supermarkets are open.

I was worried that the kitchen staff here might have difficulty finding enough food to provide three meals daily for the Red Cross workers but food seems to be available though prices have gone up.

It does seem to me that there are fewer people on the streets of Kenema but then all the schools and educational institutions are closed until further notice.

Football is also banned for now so the two playing pitches on the Pastoral Centre compound, which used to be in use by local children every afternoon, are becoming overgrown.

At the moment, the Red Cross can give no indication as to when the current Ebola crisis will come to an end. A best-case scenario would be two months!