Irish priest named as auxiliary for archdiocese of Los Angeles 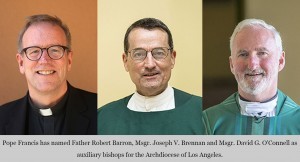 In true Hollywood style an Irish priest in a gangland parish, and a famous broadcaster, have been named among new auxiliary bishops of Los Angeles.

Yesterday (21st July) the Holy Father appointed Corkman Msgr. David G. O’Connell, as one of three new auxiliaries for the archdiocese of Los Angeles. The Cork born monsignor studied for the priesthood in All Hallows, Dublin where he was ordained on 10th June 1979 for the Archdiocese. In his current parish he has often seen the results of gangland wars, and supported parishioners affected by violence.

He said he was very moved and “a bit nervous” about his new appointment.

“I have had the privilege of being a priest of this Archdiocese for 36 years since I was ordained in 1979 in All Hallows’ college in Dublin, Ireland. I regard it as a great blessing in my life to have had the opportunity to serve here,” he said.

“The greatest joy of my life is being a pastor. It is a privilege to be part of people’s lives especially in their time of suffering and need. I think our parishes and schools are powerful instruments of transformation of people’s lives and of neighborhoods,” he said.

He expressed a hope that as an auxiliary bishop he can continue to be a good pastor for the people.

“We all have a great example in Pope Francis who, even though he has the cares of the whole Catholic Church on his shoulders, continues to reach out to the poor and the rejected in a very loving and compassionate way. It’s a great time to be Catholic,” he said.

He returns home to Cork on regular visits to family and was quoted by an American newspaper as saying he enjoys the ‘craic’ in Ireland. A far cry from his home, LA puts him in the thick of urban problems and well as doing his parish work he organizes regular retreats for fathers. He considers them as a key to changing communities, and leads the retreats in the mountains focusing on how to be good fathers, husbands and men for the community.

His fellow auxiliary bishops elect include Msgr Joseph V. Brennan and Fr. Robert E. Barron who is a broadcaster and founder of Word on Fire, a global media ministry. Commentators are already suggesting the new bishops are very much on the’periphery’ that Pope Francis has urged all Catholics to seek out.

Bishop-elect Brennan was born in Van Nuys, U.S.A. in 1954 and was ordained a priest in 1980. He has served in a number of pastoral and administrative roles in the archdiocese of Los Angeles, including parish vicar, parish priest, chaplain, member of the presbyteral council, vicar general and moderator of the curia. In 2005 he was named Chaplain of His Holiness.

Bishop-elect O’Connell was born in Cork, Ireland in 1953 and was ordained a priest in 1979. He has served in a number of pastoral and administrative roles in the archdiocese of Los Angeles, including parish vicar, parish priest, dean and member of the presbyteral council and parish administrator. In 1999 he was named Prelate of Honour.