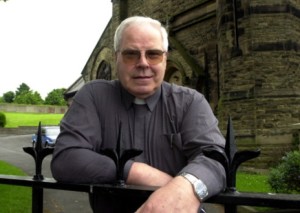 An Irish born priest found dead on the floor of his church in England is believed to have fallen 35 feet from a ladder while dusting windows in his local church to save his parish money.

Fr John Cribben’s body was discovered early in the morning by a parishioner at Our Lady and St Patrick’s Church in Walton-le-Dale, near Preston on 27 January last.

Police say there were no suspicious circumstances.

The matter has been passed to the coroner and a health and safety investigation has been launched by South Ribble Council.

News of Mayo-born Fr Cribben’s death last week has stunned the community where the 76-year-old had been parish priest for 18 years.

Mgr John Corcoran, who will officiate at Fr Cribben’s funeral, which is most likely to be held this weekend said, “It is terribly sad and his parishioners are absolutely devastated.”

He added, “Fr Cribben was cleaning the architrave above an arch when he fell from a ladder. It was quite high. We believe the accident happened the night before he was found. He had spent the morning working at the cemetery at Samlesbury and then returned later that day to work in his own church.”

“He was a larger than life  Irishman, but he had a very keen pastoral awareness and concern. He was always cheerful and anyone who met him always came away the better for it. He will be sadly missed.”

Parishioners believe Fr Cribben had been cleaning the church himself rather than employing an experienced firm.

One parishioner told the local Lancashire Evening Post newspaper, “Why was he up the ladder? He was dusting. He did the cleaning himself because he believed if he got someone in it would have been too expensive.”

Fr Cribben was a regular visitor home to family and friends in Kilkelly in Co Mayo.

He was a brother of the late Shea Cribben, lead singer with the Mayo-based Riviera Showband in the late 1960s.

His funeral arrangements have not been confirmed yet.