By Ann Schneible of Zenit.org

On 11 February 2013, Pope Benedict XVI stunned the world with the announcement that he would be stepping down from the Petrine ministry.

Since his resignation took effect less than two weeks later, the now Pope Emeritus has taken up residence in the Mater Ecclesiae monastery, located within the Vatican walls.

There he quietly prays, studies, enjoys his music, and receives a few select visitors. As he promised, he has remained out of the public’s view.

Yet the resonance of his decision to step down still remains one year later, especially among those who knew him well.

He shared with ZENIT some of his memories of the former pontiff:

ZENIT: What was going through your mind when you learned that Pope Benedict had announced he would be resigning at the end of the month?

Mgr Kennedy: You sometimes meet people who ask you: Do you remember where you were on the day when JFK was shot, or the Twin Towers came down, or when World War II ended. I can think very clearly of exactly where I was.

I was in the north of Italy, and I was just ready to leave the hotel after a two-day ski trip, and my brother phoned and said: “What’s going on in Rome?”. I said “I don’t really know. I’m not there.” He said: “Switch on the TV as soon as you can, and you’ll see exactly what’s going on.”

That moment of Pope Benedict announcing that he would almost three weeks later step down was one of those moments that is like throwing a stone into a pond, and watching all the ripples going out towards the edge of the sea. 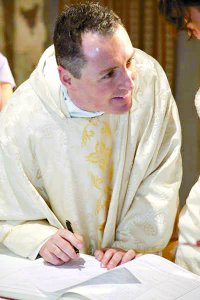 The ripple effects of that moment, I think, are still being felt one year later. What is prolonging this tugging at my heart is that he is, in some sense, gone from the Petrine Ministry but not in the usual way.

ZENIT: You’ve known Pope Benedict for many years, having worked under him at the CDF. What struck you most about him?

Mgr Kennedy: As a seminarian, the name “Josef Ratzinger” was a household name. If you had read his books, then you knew more about him. You certainly knew who he was and his role in the Congregation for the Doctrine of the Faith, where he had been appointed by Pope John Paul II.

When I had the chance to return to Rome to do post-graduate studies in 1998, I had the great opportunity to live at the Teutonic College, which is nestled between the audience hall and St Peter’s Basilica. It’s a German stronghold which goes back to 1876, and even beyond that before it became a college.

Cardinal Ratzinger was a person who knew the college very well. He was invited every Thursday morning for the German-speaking pilgrims. You can imagine German pilgrims coming down by buses, by train, and going to the audience on Wednesday, staying overnight (because it was a long journey), but many of them, because they knew he was saying Mass there the next morning, would come to the 7am Mass in German.

Three things really strike me about him. As a priest, you’d come down to the sacristy to get ready. When we came down at 10 minutes to 7 in the morning, he was already there: vested, ready for Mass, praying, and greeting individuals as they’d come in, remembering faces, catching up with people.

The second thing I noticed was that he almost stood back from the celebration of the Mass so that you had no sense that it was about him in any way, but only about God.

He almost disappeared as the Eucharist took central place.  I thought I was the only one to see this but on one occasion I was present in St Peter’s Square where I overheard two young men saying: “Isn’t it amazing how he does not get in the way of the Eucharist?”

The other thing was that he would stand and greet all the pilgrims after the Mass before slipping quietly in to the dining room to have breakfast. I noticed that his tastes were very simple and that he enjoyed the company of the various people who were present.

Most of the time it was the Rector, the post-graduate priests and some seminarians, while at other times there were visiting professors from all over Europe. You could see that the conversation was lively, often with humor and great personal interest. When he had finished, he would stand up, clear away his dishes, and then he was gone by 8am.

A couple of years later when I got to work for him in the CDF, I realised that he was at the office at least half an hour before everybody else, because our office didn’t begin until half past 8 in the morning.

ZENIT: How would you describe Pope Benedict?

Mgr Kennedy: Pope Benedict was a shy, but extremely intelligent man, a person who was very sincere, very gentle.

I remember when my mother turned 60, I asked if it would be possible for her to meet him, and he said: “Oh yes, bring her in at a quarter to 1.” I brought her in and they sat like two friends on the sofa in his private office, and had a good old chat for about fifteen or twenty minutes.

He was very kind. He was very gracious. He’d remember details about you, and years later he’d be able to say: How is that situation, or how is that person that I met years ago?

When it comes up in conversation that you work for someone like Cardinal Ratzinger, many people are curious to know what he is like. The information they had been fed about Cardinal Ratzinger was often a diet of what some newspapers had said about him.

I often noticed that people were already changing their minds about him when I began to speak about what it was like to work with him, about how kind, paternal, gentle and interesting he was.

I often said that he was a shy man, but one who was gifted with a most amazing memory. He was able to remember very specific details about people and then ask them, often years later, how a particular situation was, how their mother or father were, or was able to recall something that the individual had said to him often years earlier.

This was a side we saw of him every day in the Congregation.

ZENIT: What sort of response do you hear from pilgrims with regard to Pope Benedict?

Mgr Kennedy: Various people have come to Rome in the last year, friends, relatives, pilgrimage groups, students, and almost every one of them, almost as a natural part of their appreciation and fondness for Pope Francis, made some mention of the fact the way for the new Pope was prepared by the generous, courageous and humble act of Pope Benedict.

They were curious to know where he was living, what he was doing, whether anyone had access to him, whether he might make the odd public appearance or if he had come back to the Congregation for the Doctrine of the Faith where he had been Prefect for over two decades.

One thing about living in historical times, and particularly since we live in a media age where it is so easy to document various happenings, is that we have the chance to discuss and record for all posterity our reaction to this phenomenon one year later.  This was not so much the case, I imagine, the last time this happened.