One in every six people in Ireland today lives on an income below the poverty line, and this makes up 16.5% of the population according to research entitled Poverty Focus 2018 from think tank, Social Justice Ireland(SJI).

The research shows that over 100,000 people in employment are at risk of poverty. This shocking figure indicates that the employment system is broken and workers’ rights are not being protected or prioritised by policy makers according to SJI.

“If people in employment can’t be guaranteed a life free from poverty, then there is something seriously wrong,” Dr Seán Healy, CEO, SJI said at the launch of the research. “We have been saying for quite some time now that Ireland’s social contract is broken. This is further proof. The priorities of our policy makers should reflect the will of the people. This is not the will of the Irish people. Policy makers need to take action.”

The annual research publication looks at the figures behind poverty in Ireland, and this year highlights the working poor as a particularly vulnerable group. Its main findings state that more than 104,000 people with a job are living in poverty; and policy makers need to recognise and address this problem. This number has been rising since 2009 despite the economic recovery which has failed to address the issues of low pay, precarious work, and an unfair tax system. 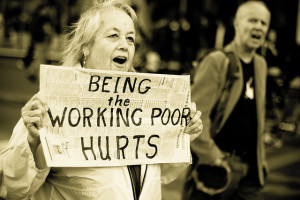 The research reveals that of all those living below the poverty line, people in employment made up 13.3%. It also highlights that the failure to make tax-credits refundable is totally unacceptable. SJI stated that the minimum disposable income needed to avoid poverty in 2018 as a single adult is €13,022 annually or 249.55 per week. For a household of 4 it is €30,210 (€578.96 a week).

“Workers rights are not being protected when 104,000 people can have a job but still be at risk of poverty. Who is to be held responsible? Surely it must be employers availing of precarious employment contracts and low pay.” said Eamon Murphy, Economic & Social Analyst, SJI.  “Who is going to take responsibility for ensuring a job is always a route out of poverty, not into it? That should surely be the most basic function of our Government.”

The research also highlighted how 780,000 people live in poverty in Ireland today. The largest group in poverty are children (26.5% of all those in poverty). That means that 1 in every 4 people below the poverty line is a child.

People on home duties (including those caring for children, older people etc.) are the next largest group in poverty at 14.7%. The unemployed and those in employment were at 13.5% and 13.3% respectively.