Home > Featured > Irish nun honoured for her work with prisoners

Irish nun honoured for her work with prisoners 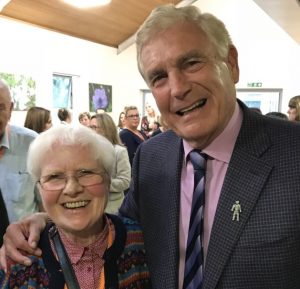 An Irish nun has been awarded one of the highest honours the British monarch can bestow for her pastoral work with prisoners at HMP Chelmsford.

Sr Philomena Purcell is originally from Mullinavatt in Co Kilkenny.

She was one of a family of 17 children. She left Ireland in the 1950s as a teenager and joined the Ursuline Convent in Brentwood, Essex.

The 77-year-old trained as a teacher and worked in schools in Elm Park and Dagenham.

She retired in 2001 but then opted to join the chaplaincy service at HMP Chelmsford in 2002, where she is now affectionately known as ‘Sister P’.

On Christmas Day, Sr Philomena led a religious service for the prisoners as she has done for the past 15 years.

She was nominated for the British Empire Medal in September but was sworn to secrecy until just before Christmas, when the medal was presented to her at the prison carol service. She received the medal from Jennifer Tolhurst DL, Lord-Lieutenant of Essex assisted by the High Sherriff of Essex, Simon Hall MBE.

On her day off from the prison, Sr Philomena also volunteers at a nearby St Francis Hospice in Essex every week, looking after terminal patients and their families.

Earlier this year she received her second High Sherriff’s Award for Lifetime Achievement. The first was awarded in 2007 for her work on ‘Fathers Inside’, a training programme helping prisoners become better fathers.

Speaking to media, Sr Philomena said, “The most rewarding part of my job is the people I meet, I see them through highs and lows and I get to accompany them on their good days and bad days.”

“Sometimes I get to tell them good news, like the birth of a child or I may have to deliver bad news like the death of a loved one.”

The Governor of HMP Chelmsford, Rob Davis said the Ursuline nun had “a natural gift for raising people’s spirits” with “an enthusiasm and energy which is seldom seen in people thirty years her younger”.

“Sister P is a great advocate for all the prisoners of all religions and none,” he added. “Chelmsford prisoners have a great respect and love for her.”

She explained that the prisoners confide in her and like her sense of humour.

“I’m very proud I work there,” she said.

She also explained that Christmas Day can be “a difficult day for the men” and that she is “grateful that I have the support of my Ursuline community when I return home”.

When asked how the prisoners reacted to her award she said, “They clapped and clapped. I told them that I accepted it on their behalf and not to worry that I would be keeping it real.”

The Brentwood Ursulines in Essex are an autonomous diocesan congregation founded in 1900. It did not join the Roman Union of Ursulines with other English communities. So, although the Brentwood community share the Ursuline charism and traditions, they also have their individual story.

The Brentwood community founded and staffed two schools in Kenya, and still have a presence there. They also built and worked in primary schools in Essex and the Brentwood Ursuline Convent High School.

In addition to Sr Philomena’s work in prison chaplaincy and at the hospice, other members of the community work with the homeless, asylum seekers and refugees, in parish ministry, with the Travelling community, and in one-to-one accompaniment.