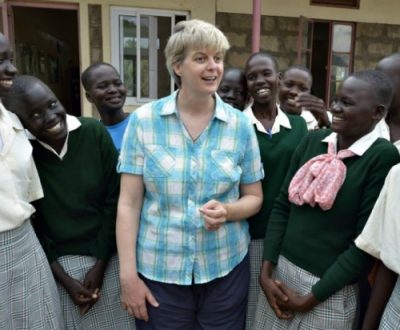 An Irish missionary sister from Bray is one of the recipients of this year’s International Women of Courage (IWOC) Awards in the United States.

Loreto nun Sr Orla Treacy was honoured for her “noble efforts to address the plight of girls in a region besieged by conflict; commitment to provide schools for girls being forced into early marriage and denied an education; and compassion for teaching and pastoral services”.

Nine other women received commendations at the ceremony.

The citation for the award spoke of Sr Orla joining other Loreto sisters to begin a mission in Rumbek in South Sudan in 2006.

“Touched by the plight of girls who were being forced into early marriage and denied the right to an education, she took action. Sister Orla and the Loreto Sisters started a girls-only boarding school with 35 students. Today, Sister Orla serves as the head administrator of the Loreto Rumbek Mission in Maker Kuei, overseeing a boarding secondary school for girls, a co-educational primary school, and a women and child-centric primary healthcare facility,” the citation said.

Speaking afterwards on EWTN’s News Nightly, Sr Orla explained that South Sudan is a country being built from the ground up. “It’s not like Syria or Afghanistan where it’s been destroyed. South Sudan has never been built, so everything is from the ground up and girl child education would be a huge factor in that.”

She explained that there was huge illiteracy in South Sudan, particularly among women. She said she didn’t know of any woman of her age in her community who was literate, as the women had grown up during a time of conflict and war.

“Even the idea of education is very far from their mind,” Sr Orla said.

Marriage is a very strong part of their culture, especially among the Dinka tribe with whom Sr Orla works. “Nine per cent of 15-year-olds are married in South Sudan. Trying to get girls into secondary school is already a miracle.”

“I think parents are now beginning to trust us and see its value and girls can also contribute towards their families. But again, as we’re in a conflict situation, parents don’t have the means to educate their children or send their children to school, so 96 per cent of what we do is donor dependant.”

Members of the public can contribute towards the Loreto mission in Rumbek South Sudan at the order’s website.

Writing in the National Catholic Reporter on International Women’s Day, Callista Gingrich, the United States Ambassador to the Holy See, described Sr Orla as “a woman of immense courage”.

“As US ambassador to the Holy See, I had the distinct honour of nominating Sr Orla for this award, bestowed upon women who show extraordinary courage and heroism to advocate for peace, justice and human dignity, often at great personal risk,” wrote Ms Gingrich.

“Sister Orla embodies these qualities and more. Her commitment to the people of Rumbek is a mark of her unique courage, inner strength, and fierce dedication to female empowerment and justice. With every contract signed, every meal provided and every diploma granted, Sr Orla Treacy advances the status of women and the cause of peace in South Sudan.”