Irish nun recalls her role as a ‘Camino Companion’ 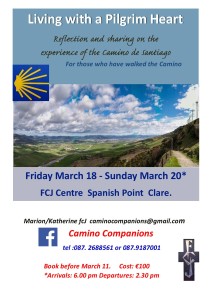 It is the time of the year, in this part of the world, where we are in the throes of winter, when we start thinking of holidays and warmer weather.

Rita Kelly, MMM, Vice President of the IMU, has experienced a different type of holiday for the past two years, volunteering at the English-speaking Camino Chaplaincy in Santiago de Compostela in Spain.

Speaking enthusiastically about her experience Rita told me, “In the past 30 years there has been an extraordinary revival of interest of the medieval pilgrimage route across Spain to Santiago de Compostela.”

“It is estimated that over 100,000 people take part in the journey on foot, bike or even on horseback, along the ancient paths each year.”

“The pilgrims come from all nations and backgrounds and for different motives. Some are searching from meaning in life; some seek spiritual redemption, others just for a good long walk.”

“There are as many Camino routes as there are starting points. However, everybody eventually comes to the Cathedral of Santiago de Compostela. It is believed that the body of St James, the Apostle, in interred in a tomb in the cathedral.”

She explains that the “Camino Chaplaincy is an initiative e of the Cathedral of Santiago de Compostela. It was in response to the acknowledgement that many pilgrims had deep spiritual needs at the end of the pilgrimage and when they finally arrived to the cathedral.”

The Chaplaincy provides a place of welcome, a listening ear and a space to reflect. It has certainly developed into a more pastoral role.

“Each country and language has a chapel within the cathedral; we, the English based Chaplaincy were based in the Chapel of Our Lady of Soledad”.

“I stayed in an apartment with two other volunteers, Fr Ralph Heskett and Sr Jennifer, a Good Shepherd Sister from Cork. Each morning we opened the Church of Our Lady of Soledad in the Cathedral at 9am and prepared for the 10.30am English-speaking Mass.”

Pilgrims would arrive in slowly with numbers increasing rapidly as the morning progressed. 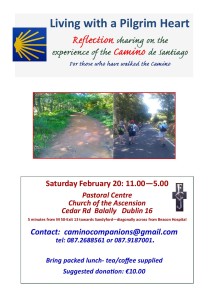 “After the 10.30am Mass we invited the participants for a cup of coffee and a chat. Even though there was a pilgrim Mass held daily in the Cathedral, the pilgrims appreciated the English-speaking Mass and the chat afterwards.”

“I was delighted to see a big increase in the numbers of people coming for the 10. 30 service. At 4pm we returned to the Chapel to have a short service of reflection and to be present to the pilgrims.”

For Rita, one of the biggest lessons she learned as a ‘Camino Companion’ was that everybody ‘does’ the Camino in his or her own way and that grief and gratitude were the two feelings that came up time and time again in conversation with pilgrims.

“I suppose the most important journey is the inward journey that we all have to face. Yes, of course people often try to run away from this, sometimes they have to do so until they are able to face things but it is a journey that in the main is unavoidable.”

“For many, the Camino may be the first time that they are actually present to themselves and the solitude of the Camino allows them the space and the opportunity to look inwards. Of course this then opens up a whole new vista. Grief, bereavement, sadness, depression and lots of other emotions and feelings surface and people can often be surprised at the intensity of these feelings.”

“This brings its own difficulties for them then as they have to grapple with the feelings that may have been suppressed for a long time. Then again, people may feel they have dealt with them only to be shocked when they find them bubbling to the surface.”

The complexities that we, as human beings all share, were very much in evidence Rita says, adding that “personally I felt very privileged to be there for people. It was wonderful to hear people saying the Camino had renewed their faith and they felt blessed to be able to do it”.

“The pilgrims I met, and I spoke to over 100, came from Australia, New Zealand, Korea, Canada, USA, England, Ireland, Poland and Scotland.”

The stories and experiences were many and varied. One common thread was that the Camino experience was more than any individual expected. For many it was an acknowledgement that it was an experience of a sacred journey , of awakening of ‘something other’.. For some, it was their first time to experience total solitude, the isolation, and the challenges, the hardships on the route, and then companionship and friendship with strangers.”

One pilgrim shared that she was always worrying whether she would get a place in a hostel or not, but one night when there were no places available, the local community opened up the church and allowed the pilgrims to sleep there and supplied them with food .

After that experience she ‘let go’ of her many daily concerns and worries.

“There was a great appreciation by the pilgrims for the service offered by the Chaplaincy, for the place and the time given to them so that they could begin the process of understanding what had occurred to them on the journey.”

“I met a number of people who return every year to continue parts of these routes. People were also offered the opportunity to write their own personal intentions. These intentions were placed in a basket and remembered each day in the Eucharist and daily liturgy.”

“However the Cathedral was not the final stop for all pilgrims. Many continued their pilgrimage to one of the most western points of mainland Europe, Finisterre.”

“In Latin, Finisterre means the end of the world. It is part of the journey that I walked. Cape Finisterre is a small piece of land jutting out to the Atlantic. The cliff top is marked with a cross and a pair of worn out boots.”

“It is awe inspiring and a great way to contemplate the journey that has been completed. I felt privileged for the opportunity to participate, even for only a short while, to be with the people who have walked and experienced the journey of the Camino De Santiago.”

For many it was the experience of a “God who is compassionate and love, slow to anger and rich in mercy” (Ps 102).