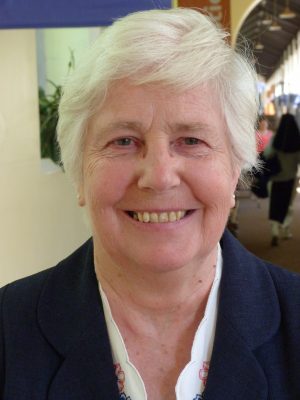 An Irish nun has been appointed by Pope Francis as a consultor to the Pontifical Council for Culture.

The 71-year-old’s appointment as consultor to the Pontifical Council for Culture is for a five-year term during which she will be invited to attend the meetings of the Council and offer inputs.

Other new members and Consultors appointed by the Pope are: Sr Dominica Dipio, MSMMC, professor of literature at the Makerere University of Kampala, Uganda; Sr Mariella Mascitelli, PDDM, architect specialising in architecture and art for the liturgy, Italy; Maud de Beauchesne-Cassanet, head of the Department of Religious Art of the Bishops’ Conference of France.

Responding to news of her appointment Sr Pat commented, “I am truly honoured to accept this nomination from Pope Francis and to serve as a consultor of the Pontifical Council for Culture.”

“Through the Council, the Church engages with the complexity of the contemporary world in a creative and imaginative way. Such a dialogue is essential considering the pluriformity of cultures that exist today.”

“I welcome the opportunity to bring my life experience and that of women religious in general to the Council’s many reflections and discussions. My background as an educator in different countries and contexts with specific focus on peacebuilding, culture and interculturality will hopefully contribute to the work of the Council.”

Prior to Sr Pat Murray’s appointment as Secretary of the UISG, she was the founding executive director of Solidarity with South Sudan, an umbrella organisation set up to foster collaboration among over one hundred religious orders to rebuild the educational, medical, agricultural and pastoral infrastructure of the new African state.

The Pontifical Council for Culture traces its origins back to the Second Vatican Council. It was established as part of the Church’s response to the need to continually engage with the cultures of the world.

The Council relies on consultors to provide specialist knowledge in the field of culture or in dialogue with non-believers. They assist the Council by their research and the information and opinions they provide.

In an interview while she was with Solidarity with South Sudan, Sr Pat Murray spoke to CatholicIreland.net about her role as spokesperson for Loreto in Ireland in 1986 following the tragic loss of six nuns’ lives in a horrific fire at the St Stephen’s Green convent in Dublin, a school she had attended herself.

One of Sr Pat’s very first teaching positions was in Cavan. “The rural community in Cavan was really struggling in the early 1970s because it wasn’t getting the grants that they were getting in the west of Ireland. It was caught between worlds. The farming community was in a very bad state. I saw rural poverty up close and I also saw strong community values being lived out.”

She later taught in St Stephen’s Green and was principal of Loreto Crumlin in Dublin and served for a couple of years with the Justice and Peace Commission as well as on the Loreto Generalate in Rome for eight years.

Last August, Sr Pat gave the keynote address to over 700 Sisters at the annual LCWR assembly.

“It is as if we are all arriving together in the same sacred space, where we are experiencing a greater fragility and vulnerability. In a profound way, this makes us more relevant than ever; it places us in communion with the people of our time and place, especially those at the peripheries.”