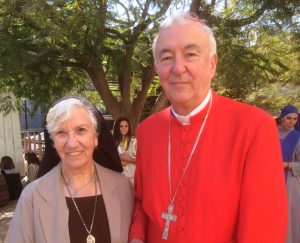 Cardinal Vincent Nichols has said he hopes his visit to Gaza on Sunday in some way strengthens the faith and hope of the tiny Catholic church and faith community there.

Addressing the 170 Catholics who live in the predominantly Muslim enclave, the Cardinal thanked them for their witness and strength.

“Christians have been in Gaza since the Holy Family fled to Egypt, as depicted on the wall behind the altar in the Holy Family Church. Their numbers are small, but I believe their faith is strong,” he stated.

There are now around 1,200 Christians, of whom 170 are Catholic, in a total population of 1.8 million in Gaza.

In addition to the Holy Family Parish where Cardinal Nichols celebrated Mass, the Catholic Church runs two schools where over 90% of the pupils are Muslim, an orphanage for disabled children, and other charities offering support to the population as a whole.

In his homily, Cardinal Nichols called on Mary to pray for the protection of the Christian community.

He also explained that the green vestments he was wearing, as worn week in week out by priests during Mass, represented Christian hope.

The Archbishop of Westminster said that what is particular to Christian hope is that while the present may be difficult and uncertain, our belief in Jesus Christ assures a certain future.

The Cardinal also met with parishioners, listening to their stories and concerns, as well as religious sisters working in Gaza.

He later held a meeting with young beneficiaries of university sponsorship and job creation schemes provided by the Pontifical Mission Society and Friends of the Holy Land, the charity set up in the UK to support Christians across the Holy Land.

With youth unemployment running as high as 60% and over half of the population under the age of 15, providing jobs and income is essential to supporting the remaining Christian population.

Among the nuns the Cardinal met was Irish-born Sr Bridget Tighe, originally from Co Sligo, who is a member of the Franciscan Missionaries of the Divine Motherhood and executive director of Caritas Jerusalem in Gaza.

She came to Gaza two years ago to take up her role with Caritas after she had finished her term as regional superior of her order in England and Scotland. 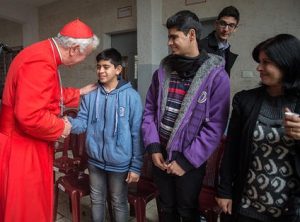 Of life in Gaza over the past two years, she told Catholicireland.net, “I’ve got used to it – one gets accustomed to almost anything. This is worrying, the abnormal becomes the norm.”

While some rebuilding of the structures destroyed in the 2014 bombardment has taken place, the blockade remains in place.

A partial lifting of that has ensured that there is no shortage of food in the shops – for those who can afford it.

According to the 71-year-old nun, Gazans are well educated, with a high proportion of university graduates. But unemployment among 16–25 year olds is very high and she said that she “sometimes see[s] young men with Masters degrees sweeping the streets on cash for work programmes. It is soul destroying.”

Another thing Gazans find very hard is the curtailment of electricity to between four and six hours a day.

The water in the taps is undrinkable so everyone buys desalinated water.

A recent UN report said that if things didn’t change radically, Gaza would be unliveable by 2020. “It is pretty grim,” according to Sr Bridget.

Though its population is over 98% Muslim, the Irish nun feels accepted as a Catholic Sister.

“Gaza is a fundamentalist Muslim enclave but Christians are not harassed, in fact they are protected to some extent.

Tragically, the Christian community has reduced in number over a short time.

“The number keeps going down. Christians get permission from Israel to go to Jerusalem and Bethlehem for Christmas and Easter and some who go do not return. They stay so-called ‘illegally’ in the West Bank and when whole families go that is the future gone.”