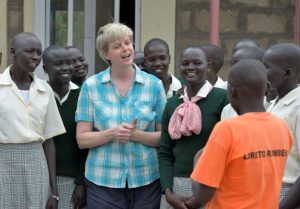 Loreto Sister Orla Treacy talks with girls at the Loreto Secondary School in Rumbek, South Sudan. Treacy is the school’s principal. The school is run by the Institute for the Blessed Virgin Mary–the Loreto Sisters–of Ireland.

A boarding school for girls in South Sudan, which was founded by Irish missionaries and opened in 2008 with just 35 students, now has over 291 students and 90% of its graduates go on to university.

In an interview with Vatican Radio, Sr Orla Treacy from Bray, Co Wicklow explained how when a small group of Loreto Sisters from Ireland arrived in Rumbek in Lakes State in South Sudan in 2006, just ten girls out of a population of 30,000 were attending secondary school.

“It has been a very beautiful journey for us and a very challenging one,” the 46-year-old said.

In 2011, after a referendum the previous year in which 99% of the people of South Sudan voted for independence, the country became the world’s newest state.

According to Sr Orla, one of the nation’s major challenges is its high levels of illiteracy.

Sr Orla explained that from the initial euphoria around independence, South Sudan had taken a painful journey “from hope and peace and joy and expectation into the reality of today” where “In a country the size of Italy,” with a population of 11 million people, “4 million are displaced and nearly 7 million are hungry”.

The Loreto Sister, who was the recipient of a 2019 ‘Woman of Courage’ Award, explained that “South Sudan has become one of those countries that are vulnerable and fragile, and sadly a dangerous place and a challenging place for many to live in.”

The ‘Woman of Courage’ Award honours “women around the world who have demonstrated exceptional courage, strength, and leadership in acting to bring positive change to their societies, often at great personal risk and sacrifice.”

She explained that Loreto Rumbek is much more than just a school; it is also a women’s refuge. “These girls are able to escape the pressures of forced and early marriage” she said of her students.

Statistics show that just 1% of girls in South Sudan finish school. According to Sr Orla, most of the girls at school in Loreto Rumbek are the first girls in their families to complete their secondary education.

The school, Sr Orla explained, is bringing about a change of mentality as the girls see their peers who graduated from school getting jobs, getting paid positions and contributing back to their families.

The families in turn are also beginning to see the value of education and beginning to believe “that girls can contribute to the building of the family”.

“And for young people coming to our school today there is great hope expectation that they can do great things for their community as well,” she said.

She noted that the government, in its peace agreement, has given 35% of positions to women, but only 19% of women in the country are educated.

“My dream and my hope is to see more and more young women take their place in society, contribute to the development of their families, to peace-building in the communities and also to take positions of leadership in the country,” Sr Orla said.