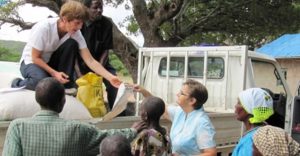 An Irish missionary’s work with those who are HIV positive in Tanzania has been featured in two high-profile British newspapers in recent days.

Sr Kate Costigan is a member of the Missionary Sisters of Our Lady of Apostles (OLA). Born in Co. Tipperary, she joined the order when she was just 19. Her first overseas assignment was in Nigeria and she later moved to Tanzania in 1998.

Sr Kate currently works in the Diocese of Shinyanga.

Both the Telegraph and The Guardian featured her role in a HIV programme that is jointly supported by a pharmaceutical company and the Vatican.

The ‘Test and Treat’ project is a collaboration between the OLA Sisters, Good Samaritan Foundation, Gilead Science, Shinyanga Diocese, and Doctors with Africa – an Italian NGO.

The programme is promoting mass checks in Tanzania, with treatment offered to anyone who tests positive for HIV, regardless of their clinical stage. More than 30,000 deaths from AIDS-related illnesses occur in the African country every year.

The five-year ‘Test and Treat’ project aims to test up to 300,000 people and treat up to 20,000 people, including an estimated 2,000 children in Tanzania, which has a population of approximately 46 million people, with up to 1.5 million people living with HIV/AIDS.

“Using high quality testing services we aim to identify those with HIV/AIDS. The next step is to effectively and quickly link those who test positive to community-based treatment, care and support,” Sr Kate explained.

Those supporting the project believe it could act as a template for other low-income countries.

The World Health Organisation is following the programme because it believes its approach could prevent 21 million deaths globally.

Based in the Diocese of Shinyanga, Sr Kate leads a team of nuns, medics and field workers at the clinic in Bugisi.

The ‘Test and Treat’ trial aims to help meet the World Health Organization’s (WHO) 90-90-90 strategy for combating HIV and Aids globally – 90 per cent of people with HIV knowing their status; 90 per cent with HIV receiving antiretroviral drugs (ARVs); and 90 per cent of those receiving treatment adhering to it to suppress the virus and stop its spread.

In Shinyanga, experts are hoping to reach 300,000 people by moving care into the community – establishing peer-support clubs where treatment can be distributed locally, and using the vast social networks of the Catholic Church.

People in Africa living with HIV/AIDS still face stigma associated with their diagnosis.

Sr Kate Costigan rides a motorbike to deliver HIV care to local villages, while local churches invite health experts to give seminars on getting tested.

In Tanzania, two-thirds of the population are Christian, and the Church still exercises strong influence.

In 2013 Sr Kate received her black belt in Karate and is one of just two nuns in the world with this recognition for her skills. She is a member of the Irish Shotokan Institute.

The Missionary Sisters of Our Lady of Apostles (OLA) was founded by Fr Augustine Planque in 1876 and has had a presence in Tanzania for 25 years. It has communities in Mwanza, Mwamapalala and Bugisi – all located in the north of the country.

Healthcare, education and pastoral work are key priorities of their mission.