Home > Featured > Irish missionary tackled robbers before they shot him

Irish missionary tackled robbers before they shot him 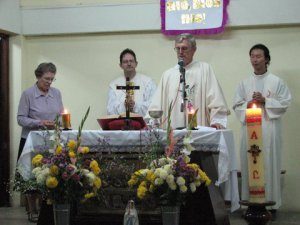 An Irish Columban missionary who was shot and wounded in both of his legs by three armed men at his residence in Peru tackled his attackers in a bid to save his parish workers’ wages.

The gun attack on 73-year-old Fr Gerard Desmond occurred on Saturday after the priest returned from the bank to his home in the slum district of San Juan de Lurigancho, outside of the Peruvian capital, Lima.

According to a spokesman for the Columbans in Ireland, Fr Cyril Lovett, the elderly missionary was preparing to go on holidays, and had gone to the bank to withdraw money to pay bills and salaries in the parish before he left.

Sr Maura Gallahue, a Columban Sister who worked in the same parish as Fr Gerard Desmond for over 20 years until she returned to Ireland at the end of February, told CatholicIreland.net that the priest never lost consciousness during the attack, despite being shot twice in the legs.

But as of Monday, the priest, she said was walking and planned to go ahead with his holiday, despite his ordeal.

According to Fr Lovett, the Columban missionary had withdrawn the equivalent of US$2,000 from the bank. He drove back to his parish and as he got out of his car to open the gate, a car stopped behind him, and three men, two with guns drawn, demanded the money that he had withdrawn.

Fr Gerard refused to hand it over so they hit him with the revolver butt on the head and shot him in both legs below the knee.

Luckily the bullets did not hit any bones or arteries.

In addition to being treated for his leg wounds, the priest got nine stitches in the side of his head but was released from hospital and is apparently none the worse for what happened, according to Fr Lovett.

Sr Maura Gallahue told CatholicIreland.net that there is a lot of violence and drug addiction in San Juan de Lurigancho. She said Peru produces more cocaine than Colombia, and that many are addicted and others sell it or commit robberies to feed their addiction.

“I got a terrible shock” she said as she recalled receiving a message from the wife of the man who brought Fr Gerard to hospital, telling her the missionary had been shot.

“The entire parish was talking about it and there were posts on Facebook with loads of prayers and good wishes; the whole parish was really upset and concerned.”

“What an experience for him,” she commented but she added that the priest had been determined to go on vacation.

“He had arranged to go for a month; he had his ticket and one of my friends who saw him yesterday said he was smiling and very calm.”

According to Sr Maura, the bank is just 3-4 minutes from Fr Gerard’s house by car.

“They were observing him. He was followed. They tried to corner him and Gerry being Gerry, he wasn’t going to let it go without a fight. He got one man on the ground and then the other two moved in and hit him on the head. Then one of them shot at his legs. He wasn’t injured above the knee, it was the calf part and the bullets went through. The left leg was more damaged than the right. He fell and he did a bit more damage to his head.”

The Columban Sister explained that both she and Fr Gerard arrived in the parish on the same day 22 years ago.

“We arrived together in Peru and we were in the language school together for the first six months of 1996. Both of us happened to be assigned to the same parish of Cristo Liberador in San Juan de Lurigancho which is about an hour outside Lima at the foothills of the Andes.”

She explained that there are over a million people living in San Juan de Lurigancho, which is a desert place, seeing little more than an inch of rain in a year.

“The poorer people live on the hills, and the parish of Cristo Liberador is enormous with up to 140,000 parishioners.”

“When we arrived first over 20 years ago, life was very tough. At that time there were very few houses that had roofs on them because it never rains there. But over the last 5-6 years the conditions have improved radically and you don’t have the poverty that you had before but there is still poverty,” she said.