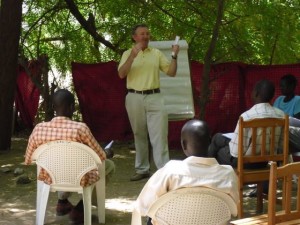 Irish missionary, Fr Patrick Devine SMA, is to be presented with the International Caring Award 2013 in Washington on 31 October in recognition of his promotion of peace through conflict resolution and reconciliation in Kenya.

The selection of Fr Devine, a member of the Irish province of the Society of African Missions, as the winner of the international category was announced by US Senators Bob Dole and Tom Daschle, Co-Chairs of the Caring Institute.

Fr Devine is the Founder and Executive Director of Shalom Centre for Conflict Resolution and Reconciliation (SCCRR) in Nairobi, Kenya.

As a recipient, he will be inducted into the Caring Hall of Fame alongside former winners of the award who include the Dalai Lama, former US President Jimmy Carter, Mother Teresa and Senator George Mitchell.

The Shalom Centre for Conflict Resolution and Reconciliation (SCCRR) is a project supported by the Society of African Missions and funded by Misean Cara.

It aspires to bring about deep-rooted transformation of conflict in Kenyan society through conflict resolution and reconciliation processes.

The necessity of having conflict management processes was illustrated during the 2008/2009 post-election violence in Kenya.

Many regions of Eastern Africa, for example, the Northern territory experience periodic conflicts between pastoralist ethnic groups. The SCCRR promotes conflict management which is concerned with non-official or informal conflict management processes.

It concentrates its work at the grassroots so as to be able to more effectively engage methods of conflict prevention, the consolidation of peace and to promote healing among communities in conflict.

Fr Patrick Devine has a BA in Sociology, History and Philosophy; a BD in Theology; a Diploma in Mission Studies and an MA in Peace Studies and International Relations.

His MA Thesis looked at the ‘Turkana Dassenach Conflict: Causes and Consequences’, which is ongoing in the conflict environment where Ethiopia, Kenya and South Sudan converge.

In 1988, he worked in remote areas of western Tanzania in the Shinyanga Region.

The main focus of his work was enabling religious and social values take root, the construction of schools, medical institutions, women and children development centres, water projects and self reliant income generating initiatives.

He was also co-coordinator for an AIDS education-prevention programme in liaison with the Tanzanian government and Swedish Caritas, as well as a member of many strategic planning synods and councils for the local Church and the SMA worldwide.

In 2003, Fr Devine was elected Vice Chairman of Religious Superiors Conference of Kenya (RSCK), which comprises of 64 religious congregations in Kenya with a membership of over 4,000 missionary and development personnel committed to evangelisation, social, educational, medical, human development in East, Central and Equatorial Africa.

The Caring Institute is a non-profit organisation founded in 1985 to honour and promote the values of caring, integrity, and public service.

Inspired by the example of Mother Teresa, the Caring Institute believes most problems can be solved if human beings truly care for one another.

The Institute says it is committed to spreading the caring credo and celebrates those “special individuals who transcend self and devote their lives to serving the disadvantaged, poor, disabled, and dying. Their enduring dedication to caring uplifts us all and ennobles the human race.”

“Behind all our endeavours — past, present, and future — is the central concept that one person can make a difference,” the Caring Institute states.