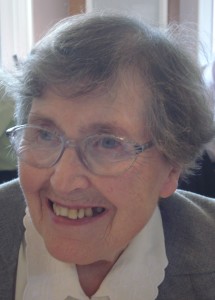 The first member of the Medical Missionaries of Mary to reach her 100th birthday celebrated the milestone on Wednesday.

Sr Marie Conlon, a native of Stoke on Trent in Britain, trained as a teacher, but felt God was calling her to the religious order founded by Irish woman, Mother Mary Martin.

After her religious profession, Sr Marie was assigned to Nigeria where she was part of the team staffing the residence for young women training as nurses at St Luke’s Hospital, Anua.

Later, Sr Marie was elected a member of the Central Leadership Team of MMM and served in that capacity from 1969 to 1975.

She also served as Editor of the MMM magazine.

She was a member of an evaluation team of MMM ministries in East Africa before her retirement at the order’s motherhouse Aras Mhuire in Drogheda, Co Louth.

According to an MMM spokeswoman, Sr Marie “was always active, always reading, always stimulating us in our thinking and adaptation to new ideas as well as evaluating what had gone before.”

In a recent interview for the MMM website, Sr Marie recalled, “I was born in Tunstall, Stoke-on-Trent, a mining area near Manchester. I had one brother and one sister. When I started my education, career options for girls were limited to nursing or teaching. I was fortunate to win a scholarship to secondary school and got into a good teacher training college in London.”

“I became a primary school teacher and taught in Birmingham while I applied for jobs nearer home so I could help my family. I taught for eight years, from the very young ones to fourteen-year-olds.”

She had felt a call from God from the age of thirteen but she was not sure where to pursue it.

After finishing her training, she started to write to medical orders. She did not get much encouragement from family or clergy but finally the local curate gave her a book about a new congregation, which he said would therefore “probably be easy to get out of.”

According to Sr Marie, she thought the MMM “looked like sensible women and within a few months I had entered.” This was in 1947, when the MMM was only ten years old.

“There were seven in my group in the novitiate. There seemed to be little organisation about things. I started off in Rosemount in Dublin, but two weeks later I was in a car headed for Drogheda just because there was a seat available! I didn’t realise the congregation was just beginning. It was difficult because there was little money and few personnel.”

She was professed in March 1950 and by May was on her way to Nigeria.

“For some months I helped in different houses when Sisters were away. Then my real work of teaching began, which I did for almost twelve years. At that time girls needed more education to prepare for the West African School Certificate.”

“I taught English to the student nurses at our hospital in Anua and provided tutoring in preparation for exams. I used every opportunity to make English understandable, explaining how it was used in textbooks and exam papers.”

“I taught religion, music, and dramatics. I even taught anatomy to the ‘prelim’ nurses because I had done a first aid course during the 1939 – 45 War.”

“While education was important for girls in general, it was also a time of great development in the country in preparation for independence. It was exciting to be part of that era.”

Sr Marie returned to Ireland during the war in Nigeria in 1968. She served in MMM administration, in mission awareness, and as editor of the MMM magazine.

In 1976, she was assigned to Kenya, where she taught for ten years, including teaching religion in several schools.

In 1988, for health reasons, Marie wasn’t able to return to Kenya. Since then she has lived at the MMM motherhouse. She continued teaching, helping in adult literacy programmes.

According to Sr Marie, “It is better realised now, that the Christian is a missionary to everyone she or he meets. Therefore the missionary must try to understand herself and her neighbour and to know the Faith and the Church well, to have a sense of history and proportion. This is my dream.”