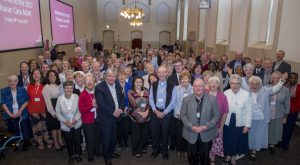 Fifty-five organisations working in 45 countries in Africa, Latin America and Asia have transformed the lives of over 1.4 million people through development projects.

The figures were revealed in Misean Cara’s 2016 Annual Report and New Strategy 2017–2021 launched at its AGM in All Hallows College, Dublin.

Over 100 missionaries attended, representing organisations with a combined membership of tens of thousands, working in over 60 countries, indicating the extent of the global reach of the missionary movement.

“Last year was one of our most successful to date. We funded 270 different projects. Our true success is reflected in the lives that are changed for the better in places that face extraordinary challenges, such as South Sudan, the Democratic Republic of Congo, Malawi, and parts of Kenya and India. It is inspiring to see a life transformed due the active care and belief of a missionary,” said Heydi Foster, CEO, Misean Cara, which supports Irish missionary organisations.

She went on to describe successes such as a young girl graduating from secondary school in South Sudan; or a child in the barrios of Lima who has a safe place to play; or the man in South Africa living in dignity, who is not ashamed to be HIV positive, reaching out to help others who are infected.

“Irish missionaries are even more relevant today than they were 30 years ago. Our 2016 Annual Report highlights the key role missionaries play in international development. Our missionary movement is borderless, and focuses on transformation that is community-led and realised by those same communities,” said Heydi Foster.

Irish missionaries are targeting the most marginalised and vulnerable of communities, and Misean Cara has funded women and children’s rights; sustainable agriculture; secondary education; maternal and child health; and HIV and AIDS work.

The report highlights several projects. For example, the Community Mental Health Outreach in Malawi by St John of God Brothers, which received just under €600,000 (2015–2016), is one of only three mental health facilities in the entire country and has had 7,100 beneficiaries.

In Uganda the Women and Children First Organisation, in conjunction with the Sisters of the Sacred Hearts of Jesus and Mary, received just over half a million euro to help subsistence farmers become more productive, with five groups digging wells for irrigation for vegetables, and ten fish farming projects. 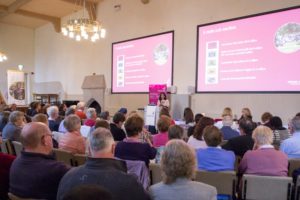 Heydi Foster described her recent trip to Peru and Colombia and the projects she visited.

In Lima, for example, the Columban Fathers’ ‘Sí, Da Vida’ project is giving life to people living with HIV and AIDS in the urban slums of Lima.

Their slogan of “Vida larga, vida plena, vida digna, vida feliz” – “A long life, a full life, a life of dignity, and a happy life” – is a rallying call that is inspiring people to make changes in their lives, according to Heydi Foster.

In Colombia she visited a project supported by the Little Sisters of the Assumption that is supporting the peace initiative between the government and FARC rebels.

“The project trains and empowers women from remote war-ravaged communities to become peace-builders and human rights defenders. This is an amazing feat, and Irish missionaries deserve to be credited for their substantial contribution to making the world a better place,” she said. She thanked Irish Aid for their support to Irish Missionaries.

Lucy Franks, Chairperson, Misean Cara, emphasised “accompaniment” as the essence of the work in 2016.

“Our missionary movement at its heart promotes accompaniment. It speaks to sharing, reciprocity,” she said. “[It is] instrumental in building trust within vulnerable and hard to reach communities, who over time become confident that they will not be abandoned, and this is what we mean by ‘leaving no one behind’,” she said.