Home > Featured > New translation of the missal in Irish due in the autumn: Primate

New translation of the missal in Irish due in the autumn: Primate 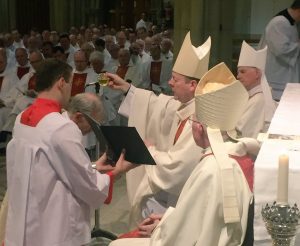 A new Irish translation of the missal is to be launched later this year, the Primate of All Ireland confirmed on Sunday.

In his homily for the ordination of Dr Alan McGuckian as the new bishop of Raphoe, Archbishop Eamon Martin said he would like to see more parishes, not just those in the Gaeltacht, introduce regular Sunday worship in the Irish language.

Highlighting the country’s first Jesuit bishop’s familiarity with and respect for the Irish language, he said it would be “invaluable”.

Nearly half of the ordination ceremony at the Cathedral of Saints Eunan and Columba in Letterkenny, which was attended by up to 1,000 family, friends and church representatives as well as civic leaders, was in Irish – from the readings to prayers to hymns.

Speaking to media after the ceremony, which lasted almost three hours and was concelebrated by up to 140 priests and over 20 bishops, Bishop McGuckian said he had “no plan” for Raphoe at this early stage.

“People are asking me what are the challenges and I don’t know what the challenges are. We will figure that out together and my job will be to get to know people and to get to know the priests and to learn. I am not coming in as some big expert from outside – that is the worst thing you can be – some big expert telling everybody what to do…! Together we will work out what our challenges are and we will face up to them. But we’ll take our time; we’ll listen and we’ll learn what is going on first.”

Bishop Alan is one of three McGuckian brothers who are all Jesuits. The ordination Mass was concelebrated by Bishop McGuckian’s two brothers, Fr Bernard McGuckian and Fr Michael McGuckian, as well as Canadian Archbishop, Dr Terrence Prendergast of Ottawa, a personal friend of Bishop McGuckian.

In his address at the end of Mass on Sunday, the 64-year-old Jesuit explained to the congregation that his episcopal ring had been a gift from the McGuckian family.

Speaking to catholicireland.net, Fr Barney McGuckian said it was the McGuckian women who had chosen the ring, which has the Jesuit emblem on it. 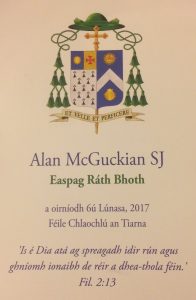 He explained that Bishop Alan was 17 years younger than him. “He was only five when I joined at 22 or 23.”

According to Fr Barney, who is editor of the Pioneer magazine, the selection of Bishop Alan was “very moving” for his Jesuit family and a new experience for the Jesuits in Ireland.

He added that the Diocese of Raphoe had only produced one Jesuit in 400 years and that was in the 1600s.

Asked what he could bring to this role as a Jesuit, the first Jesuit bishop in Ireland responded, “We’re not unique but we do talk all the time about discerning the will of God, in our personal lives and in our lives as communities.

The new Bishop of Raphoe chose the motto, ‘Et velle et perficere’ from Chapter 2 of the Letter to the Philippians: “It is God for his own loving purpose, who puts both the will and the action into you.”

The left half of his episcopal crest contains the arms of the diocese of Raphoe, which dates from the Middle Ages.

The ermine symbol of royalty is a reference to the kingdom of Aileach; the sun is a symbol of God in many religions but especially for Christians – Christ was foretold as the ‘rising sun of righteousness’ (Mal. 4.2, Lk 1.78).

The red cross is one of the many forms of the Christian symbol of salvation.

The right half of the crest includes, on blue background, the seal of the Society of Jesus and the scallop shell of the pilgrim of Santiago.

In Catholic heraldry the chevron stands for the rafter that holds up the roof of the church. Here it represents Mary Mother and protector of the pilgrim Church on earth. The argent (silver) denotes her transparency or purity.