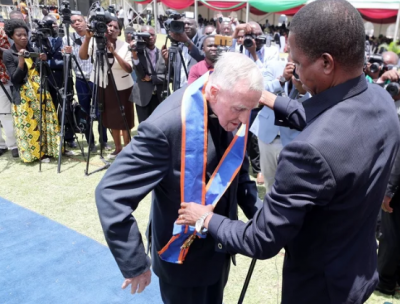 A Co. Offaly-born Jesuit has been honoured by the government of Zambia for his work in developing strategies for HIV prevention.

Fr Kelly has worked for decades to educate people about the HIV virus and to promote safe behaviour among young people and those most at risk.

Born in Tullamore, Co. Offaly in 1929, Fr Michael was one of seven children, three of whom became Jesuits.

He studied at University College Dublin and was awarded a first class honours BA in maths and mathematical physics in 1952.

He then went on to obtain a licentiate in philosophy in 1955 and was ordained a Jesuit in 1961.

On completion of his studies, he moved to Zambia. Initially, the Irish missionary taught at secondary school level. During the period just before and after Zambian Independence, he served as Head of Canisius High School.

Fr Kelly was awarded a PhD in child and educational psychology in 1974 and subsequently became a senior lecturer and Dean of the School of Education in the University of Zambia (UNZA) in 1975.

Throughout his period at the University of Zambia, Fr Kelly was closely involved with the development of education in Zambia, participating in the educational reform movement in the 1970s, and the production of the 1991 policy report ‘Focus on Learning’, and the development, in 1996, of the current education policy, ‘Educating Our Future’.

He has campaigned for better educational opportunities for girls.

From the late 1980s, as Zambia was dealing with the devastating impact of the AIDS pandemic, Fr Michael redirected his attention to addressing HIV/AIDS.

Zambia is one of the worst affected countries in sub-Saharan Africa. Seeing so many men, women and children being lost to the disease moved him to take action.

While much of the attention in the HIV/AIDS arena has been on the area of treatment and care, Fr Kelly was a consistent advocate, at national and international levels, for the importance of prevention and the role of education in that context.

He argued that the longer children could be kept in school, the higher the chances of delaying sexual activity and the better equipped young people are to understand and protect themselves.

He also stressed that getting more children into school, especially girls, and ensuring they get a quality education was critical if the numbers of people becoming infected by HIV was to be reduced.

Through his research and writing about AIDS, his work has became known to many throughout Africa and internationally.

His list of publications includes fifteen books, numerous articles in professional journals, and several teaching modules relating to educational management and planning in a world with HIV and AIDS.

One of his many books on this subject has been described as a seminal and definitive text on our tasks and challenges in fighting AIDS.

He has contributed to the work of the World Bank, UNESCO, UNAIDS, UNICEF, Oxfam and a range of other AIDS related organisations.

In addition, he is a board member for RAISA (Regional AIDS Initiative for Southern Africa, based in Pretoria), Restless Development (formerly Students Partnership Worldwide), Zambia Open Community Schools, Zambia Senior Citizens Association, and the Zambia Truck Drivers’ Association (as a member of the Advisory Board).

Fr Kelly has worked very closely with the Irish government in informing their policy on HIV and AIDS.