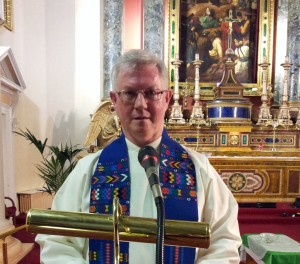 The Jesuit who organised the first ever Mass in Ireland to honour martyred El Salvadoran church leader, Archbishop Oscar Romero, has urged young people today to recover some of the values and inspiration of the Church of that era.

Speaking after he celebrated the 35th anniversary Mass for Archbishop Romero in St Francis Xavier Church in Dublin on Sunday evening, Fr Michael O’Sullivan said he felt Oscar Romero lived at a time when the Church in Latin America gave hope and inspiration to people.

“Here was the Christian faith inspiring people to stand up for social justice; put their lives on the line – it made Christianity very relevant to people’s lives,” he said.

Speaking to CatholicIreland.net, Fr O’Sullivan continued, “I think a lot of young people now probably have grown up at a time when they are more aware of the Church for sexual abuse and the bad handling of those cases and they have never really known the Church that Oscar Romero was part of.”

He added, “We really need to retrieve and recover that whole period – the values and inspiration that he can give people for their lives today.”

Fr O’Sullivan, who was a founder-member of the Ireland Church Group in solidarity with Nicaragua, and who spent time in El Salvador in 1991 as the anniversary of the martyrdom of the Jesuits in 1989 drew near and again in 1992, said it is important to realise that there are people still being martyred for their faith in different parts of the world today.

He referred to James Foley, the journalist who studied at the Jesuit Marquette University and was beheaded by ISIS in August 2014. He wrote an article for Marquette Magazine about how the Rosary helped get him through his captivity.

Fr O’Sullivan, who lectures in All Hallows, lamented the lack of media coverage for stories about the Church and those putting their life on the line to help the disadvantaged day in and day out.

“The media these days gives loads of space to issues about the Church that are very negative. This gives people only one view of what’s happening and they are getting a very unbalanced view of Christianity and the Church as a result. There are so many other people doing great work that doesn’t get highlighted in the same way at all.”

Fr O’Sullivan was arrested at the airport in San Salvador in 1991 and detained under armed guard for the night, and then deported to Nicaragua the next morning. 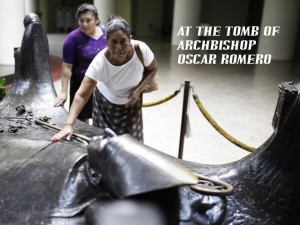 “I got back later due to pressure by the Jesuits in Salvador. It seems that my stands leading protests against US foreign policy in El Salvador in Dublin and organising liturgies on Romero’s anniversary, and because I had worked in Chile during the Pinochet dictatorship may have been behind their refusal to let me in the first time. When I came back the second time (1992) the peace accords had been signed.”

In 1980, when Archbishop Romero was murdered, he was nearing ordination and completing theology studies.

“I was coming towards the end of my studies and I decided to organise the first Mass in Ireland for Romero. We had it here in Gardiner street and here we are 35 years later still in Gardiner Street.”

While in El Salvador he visited the chapel where the soon to be beatified archbishop was shot on 24 March 1980. He also visited his home and the field where four American churchwomen were raped and killed by forces affiliated to the right wing and US-backed government of El Salvador.

The Jesuit spent time at the University in San Salvador where the six Jesuits and their housekeeper and her daughter were murdered in 1989.

He retraced the final journey of Jesuit Rutilio Grande who was also targeted for his solidarity with the poor and whose murder inspired Archbishop Romero to find his voice.

“It is part of me and part of my story – these people have formed me and inspired me and I bring that with me wherever I am and into my teaching and lecturing and writing,” Fr O’Sullivan told CatholicIreland.net.

In his homily, Fr O’Sullivan recalled that on 2 December 1980, Ita Forde, Maura Clarke, Jean Donovan, and Dorothy Kazel were coming from the airport in San Salvador, capital of El Salvador when they were abducted and killed.

“The murder of these four women shows that in honouring Romero as a martyr we are also honouring by implication all the church workers and missionaries, whose faith inspired them to put their lives on the line for God and God’s dream of a better life for everyone in a country named after Jesus – El Salvador means ‘The Saviour’.”

He told those who attended the commemorative Mass that as well as being a symbol of all the martyrs of El Salvador and Latin America in those years, Archbishop Oscar Romero is also a martyr of the Church of the Second Vatican Council.

He said Archbishop Romero’s martyrdom is closely linked to that of his Jesuit priest friend, Rutilio Grande on 12 March 1977, when he was gunned down with two travelling companions Manuel and Nelson on the journey from Aquilares to El Paisnal to say evening Mass. 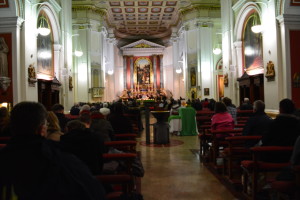 “Grande was murdered because his faith had inspired him to become a great champion of the rural poor in his own land. Manuel and Nelson were assassinated because they were witnesses, nobodies for their killers, and in the way.”

He was not the choice of those who were engaged strongly in a faith-based struggle for justice.

They saw him as being too timid to give the leadership they wanted, and needed.

But he was a friend of Rutilio Grande – a large photo of Grande hung in his simple home when I went there in 1991.

Fr O’Sullivan explained that Eva Menjívar, a missionary sister who knew Romero and worked with Grande, was tending Rutilio’s corpse the night he was killed.

She was “using a towel to absorb the blood that was trickling out, when Romero arrived.

She said Romero approached the corpse and, after standing in silence for several moments, said, ‘If we don’t change now, we never will.’”

The Archbishop cancelled all the Masses in the diocese for the following Sunday and held one Mass in the cathedral.

He ran into strong opposition from the apostolic nuncio, who was later the nuncio – Archbishop Emanuele Gerarda – in Ireland, as well as from many of the bishops.

Romero called for a full investigation into the killings of Grande and his travelling companions during the Mass and said he would not take part in any state functions until this had happened.

It never happened and so he was conspicuously absent from such events thereafter.

After Grande’s death Archbishop Romero became a good friend of Jon Sobrino, the renowned liberation theologian who opened the door to him when he arrived on the night of Grande’s murder and who became his theological advisor. 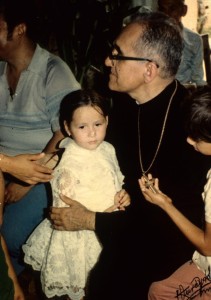 Sobrino had escaped martyrdom in November 1989 when the six members of his Jesuit community were dragged from their beds and assassinated by an army death squad, along with Elba Julia and her daughter, Celina, who had taken refuge with the community because they feared for their lives after their home had been damaged by army gunfire.

The murdered Jesuits included Amando Lopez who had done his theology studies at the Jesuit house of studies in Milltown Park in Dublin and was ordained in the chapel there, and Ignacio Ellacuría, the head of the University, who had completed his Jesuit training here in Dublin.

In a Mass in the university chapel for Romero after he was martyred, Ellacuría had said, “In Archbishop Romero, God has passed through El Salvador.”

Those responsible for the killing of Romero, Grande, Ellacuría and companions, the mother and daughter, and the four US women missionaries had all been trained at the School of the Americas in Fort Benning, Georgia, USA.

Archbishop Romero sometimes said, “A Church which does not suffer persecution, but in fact enjoys the privileges and the support of the world, is a Church which should be afraid, because it is not the true Church of Jesus Christ.”

On 24 July 1979 he said: “It would be sad that in a country in which there are so many horrible assassinations there were no priests counted among the victims.”

The day before he was killed he appealed publicly to the soldiers urging them to cease the repression and lay down their arms.

“After that appeal he seemed at peace”. He went for lunch with a family who were friends of his and played with the children. But during the meal he experienced a moment where “he wept openly”.

“He remembered his best friends and spoke about the gifts God had given each of them”. He knew his hour was near.

Romero saw the struggle for justice in his country as a struggle against forces that were not simply political and economic, but demonic, according to Fr O’Sullivan.

He saw it as a struggle against the forces of sin. He knew such forces had killed Jesus, but he also believed in the resurrection of Jesus against these forces that appeared initially to have overcome and done away with him.

Fr O’Sullivan concluded his homily by praying, “May the martyrdom of Oscar Romero inspire us to deepen our intimacy with God and to commit ourselves even more firmly to God’s dream of a world of beauty, truth, goodness, and love! Amen! Alleluia!”