The Irish Hotels Federation (IHF) has pledged full support for an anti-prostitution and anti-trafficking campaign and code of practice.

Hotels which sign up to the code are publicly stating their commitment to safeguard children on their premises, especially from any form of sexual exploitation.

In return, the hotel logo will be posted on the campaign’s website, and it will be known to all supporters and the public that the hotel is committed to protecting children and operates best practice in this area.

The executive council of IHF met with Sisters Mary Ryan RSM and Denise Boyle FMDM, who gave a presentation about the MECPATH (Mercy End Child Prostitution and Trafficking in the Hospitality Sector) campaign.

President of the IHF, Michael Vaughan, told them he would invite all his members in Ireland to get involved with the campaign and to meet with members of the MECPATH team.

Some of the hotelier council members present at the meeting offered to help the Sisters draw up a template for use when they or others in the campaign team meet with individual hoteliers around the country.

They also discussed holding a ‘Training for Trainers’ session in early March, for hoteliers plus their human resources teams, who in turn will train hotel staff in implementing the *ECPAT Code of Conduct.

“This is an essential element of the ECPAT Code, designed to ensure that key hotel personnel will receive the training they need, to recognise situations where children may be vulnerable and to learn how to deal with such situations when they arise,” Sr Mary Ryan stated.

Personnel from the Anti-human Trafficking Unit (AHTU) of the Department of Justice and the Garda National Immigration Bureau (GNIB) will provide the training, in conjunction with some members of the MECPATH team. 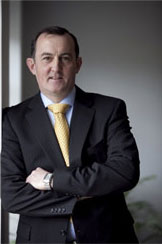 There are also dedicated personnel in the office of the Director for Public Prosecutions (DPP) assigned to deal with the prosecution of human trafficking cases.

Franciscan Missionaries of the Divine Motherhood (FMDM) Sister, Denise Boyle, who returned to Ireland recently having served as  Executive Director of Franciscans International, got involved the ‘Mercy End Child Prostitution and Trafficking in the Hotel and Hospitality’ sector (MECPATH).