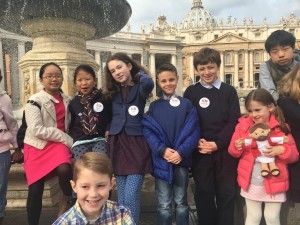 Twelve-year-old Clara O’Gormain from Galway and 259 children from countries around the world including Russia, Syria, Australia, Nigeria, each wrote a letter to the Pope asking him their own personal questions.

Thirty children had their letters and drawings chosen by the Pope and he has replied individually to each child in a unique book illustrated by the children themselves.

Clara and the children were flown to Rome for a special meeting with the Pope last week where she gave him a present of a tin whistle.

“He was very kind to us but what I like most was that he took our questions seriously when he answered them – sometimes adults don’t do that with children”, she said in an interview to Irish Jesuit Communications. (Listen to full interview attached below).

Clara is a pupil of the Jesuit Scoil Iognáid in Galway and wrote her letter as gaelige and it was translated into in English.

She asked the Pope if he felt like a father to everyone? And he concluded his answer with ‘Yes Clara, I like being a Dad!’

Messenger Editor Fr Donal Neary SJ, says the Pope expresses a deep theology very simply in his responses to the huge variety of questions so typical of young imaginations.

“It’s full of the joy that we associate with the Pope, like when Prajla from Albania (age 6) asks, ‘Dear Pope Francis, when you were a child, did you like dancing?’

And the Pope replies that he always loved dancing even as a child and as a young adult he loved to do the tango. And he concludes that people who can’t express joy ‘become sick with too much seriousness… so dance now children so you won’t be too serious when you grow up!’”

But there are deeper, sadder moments too, says Donal Neary.

Luca (age 7) from Australia had to deal with the death of his mum and he asks, ‘Dear Pope Francis, my mum is in heaven. Will she grow angel wings?’ “And it’s tragic to read ten-year-old Mohammed from Syria who asks ‘Dear Pope Francis, Will the world be again as it was in the past?’” says Donal Neary.

The book is the brain-child of the Jesuit publishing company in Chicago, Loyola Press, headed up by Belfast born Jesuit, Paul Campbell.

He says the book has received extensive media coverage in the states, featuring on ABC’s Good Morning America. “And it was also in the top ten books selling on Amazon,” according to Fr Campbell.

Fr Donal Neary SJ says many people will buy the book as a First Communion or Confirmation present.

“But it’s a book that delights adults as well as children, and speaks from the heart to both”.

Dear Pope Francis will be published on 1 March 2016 by Messenger Publications priced at €14.99