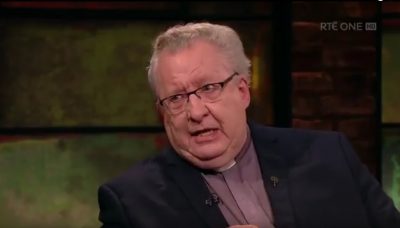 A priest said to be Ireland’s most experienced exorcist appeared as a guest on Friday’s Late Late Show on RTE.

Fr Pat Collins told chat show host Ryan Tubridy that demand for his services is high at the moment as Ireland endures “a tsunami of evil”.

After admitting that most lay people will not have seen evidence of a demonic possession, Fr Collins described some of the signs that might indicate that a person was possessed. They might have detailed knowledge about your personal history that they would not otherwise possibly know; they might display knowledge and comprehension of foreign languages that they would not, or could not, be expected to know; and they might display superhuman strength.

One frequently observed phenomenon in exorcisms is that a person might speak with two different voices, said Fr Collins. “A woman may have a sweet feminine voice when I was talking to them. If I had an interview with a person, I would often say to them at the end, ‘Do you mind if I say a prayer with you?’ And I will put out my hands and pray in the name of Jesus that the power of the Spirit will touch them. And straight away instantly this strange voice comes out, and the woman’s voice is gone, and it’s this gruff voice, usually blaspheming and telling me, ‘You have no power over me, I am in total control here’.”

Asked if he believed these harsh blaspheming voices were the voice of the devil, Fr Collins admitted that from his study of psychology he understood that people may have “sub-personalities” within their personal identity: “It’s not going to clinch the deal with me, but it would make me very suspicious.

“The devil can impinge on your inner life, on your spiritual life, and you will lose control in those areas,” Fr Collins said. “Now, for example, and I have to be very tentative when giving these examples, but some people who will have persistent thoughts of committing suicide, for example, they could be – mark my words – could be oppressed by an evil spirit.

“The Bible says that the evil spirit is a murderer, so he’ll often want people to kill, and one of the people that you can kill is yourself. So although people could have suicidal feelings for other, psychological reasons, sometimes they will want to commit suicide because of this spiritual power impinging on them.”

After the interview there was a strong reaction to Fr Collins’ appearance on social media, particularly on Twitter.