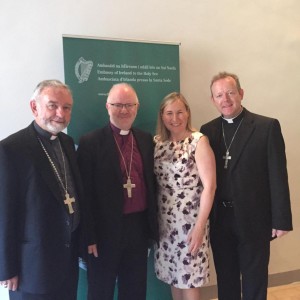 New figures released by the Department of Foreign Affairs shows it cost a little over €32,000 to run the Irish Embassy to the Vatican last year.

The figures provided by the Minister for Foreign Affairs, Charlie Flanagan, reveal that it cost the State €32,461 to operate the embassy at the Holy See which was re-opened in January 2014.

The spend, which represents a small portion of the State’s overall €61 million embassy bill in 2014 – is just €1,549 more than the €30,912 the State spent on renovating two bathrooms at its Paris embassy last year.

The bill for the nearby Irish embassy in Rome cost €1.3 million.

The newly elected Fine Gael/Labour coalition government closed the Irish embassy in the Vatican as well as Irish embassies in Timor Leste and Iran in 2011 in order cut costs.

The then Foreign Affairs Minister, Eamon Gilmore, said that the closure of the three embassies would save around €1.25m a year.

He said that while the ”embassy to the Holy See was one of Ireland’s oldest missions, it yielded no economic return, and that Ireland’s interests could be sufficiently represented by a non-resident ambassador”.

However, in January of last year, the Government announced that it would reopen the embassy.

It then announced the appointment of Emma Madigan from the Irish Department of Foreign Affairs as ambassador who would have “a particular mandate to follow the activities of the Holy See on the development and human rights front”.

In a statement at the time, the Department of Foreign Affairs said that Ms Madigan would be the only member of staff and referencing Pope Francis, saying that since his appointment he has “become a leading global advocate for action to address hunger and poverty and for the respect of human rights”.