The Irish Church Services TV/Church Support Group is supporting a free live online eConference organised by the BBI – the Australian Institute of Theological Education – which will be broadcast on Thursday 10 August.

“We are delighted to be associated with a very successful quality event with significance in today’s world and we are looking forward to sharing many of the resources and courses from BBI-TAITE in the very near future,” Tony Bolger, CEO of Church Support Group told catholicireland.net.

The Irish and Australian organisations have partnered to offer high quality distance learning theological education online. ‘Gospel Leadership in Times of Chaos: the Hope of Pope Francis’ is the title of the 13th Annual National eConference.

“In the past year alone, communities around the world have been grappling with momentous socio-political change and uncertainty,” state the organisers.

They cite examples such as the rise of fundamentalism, the growing violence and displacement of peoples in the Middle East, the election of numerous populist leaders such as Presidents Trump in the USA and Duterte in the Philippines, Britain’s historic vote to leave the European Union, as well as the electoral success of nationalist parties across the EU gained by promoting xenophobic policies of division.

At this year’s eConference, prominent international and national speakers and panellists will reflect upon these turbulent times and discuss them in the context of Pope Francis’ unique style of leadership.

“Pope Francis represents the hope of many people in these times of uncertainty: his message talks about belonging, dialogue, social justice, and mercy in a way that is both a challenge and inspiration for the world and the Church,” state the organisers.

Since 2009, the BBI has been hosting international eConferences in partnership with the Australian Catholic Bishops’ Conference. Some have attracted audiences from over 30 countries. The conferences are streamed live and for free over the internet. 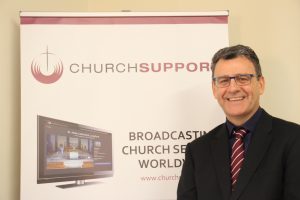 Gerard Goldman of the BBI.

“In 2009 we had every diocese in Australia – 28 dioceses – and all of New Zealand logged on as well as another 10–12 countries. We had around 50,000 people; it was the largest adult faith event, apart from World Youth Day, in Australian history,” Dr Goldman, CEO of BBI, explained.

He told catholicireland.net that “One of the things that is critical to BBI is making the richness of theology available to people at all levels, not just to postgraduates.”

The eConferences use an adult learning methodology of 20-minute lectures, which are geared towards the so-called average person who is trying to understand something about theology, scripture, the Church or the world.

“We’ve done these over the years with leading Australian scholars and at times leading international scholars who have been able to be part of the conference from Australia,” said Dr Goldman.

After hosting 13 such conferences, the BBI has built up a body of material and some “wonderful learning experiences”.

Each of the conferences contains up to five 20-minute lectures and a question and answer session of between 45 and 60 minutes, in which the panel of speakers responds to questions sent in by participants from around the world.

The eConferences have covered areas such as St Paul, the Year of Mercy and all the Gospels, as well as violence and the Abrahamic faiths. They are structured so as to be suitable to parish groups, with time allowed for discussion.

Church Services Group, which is based in Bray, Co. Wicklow, is involved in high quality parish TV, so these eConferences could be transformed into DVDs and made available to CSG’s parish TV network, stated Dr Goldman. Parishes could access an important library of adult faith education.

Speakers and panellists at Thursday’s eConference include the Panel Facilitator Noel Debien, who is an ABC Religion Presenter.

Professor Massimo Faggioli, Professor of Historical Theology, University of Villanova (Philadelphia), who is an international papal expert, theologian and political scientist, is speaking on the topic ‘The State of the Catholic Communion Today’.

Mr Paul Kelly, Editor-at-Large of The Australian, and one of Australia’s most respected political writers, is addressing the subject ‘The Crisis of the West: the Failure to Unite Faith and Reason’.

The Hon Bob Carr, Professor of International Relations at the University of Technology Sydney, and former NSW Premier and Foreign Minister of Australia, is speaking on ‘The Responsibility to Protect: Peace and Security in Challenging Times’.

Sr Clare Condon SGS, Congregational Leader of the Sisters of the Good Samaritan and Winner of the 2013 Human Rights Medal awarded by the Australian Human Rights Commission, is addressing the topic ‘The Simplicity of the Gospel cuts through the Rhetoric’.

Rev Dr Gerald A. Arbuckle SM, an internationally respected theologian and anthropologist, is speaking on ‘Leading in Chaotic Times: The Example of Pope Francis’.

Panellists include Ms Elizabeth Proust AO, Chairman of the Australian Institute of Company Directors and Member of the Truth, Justice and Healing Council, and Sr Ruth Durick OSU, the Australian Provincial of the Ursulines of the Roman Union and the President of Catholic Religious Australia (CRA).

Irish and global viewers can register to view what will be one of the world’s largest online conferences live at: http://www.bbi.catholic.edu.au/short-courses/eConference-2017. The conference begins at 10.30am in Australia, making it a 1.30am (Thursday 10 August) start for Irish participants, concluding at 5.45am (Irish time).