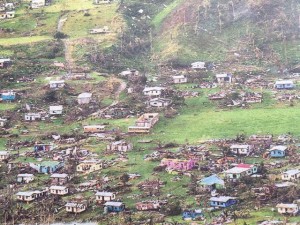 In a report on the cyclone disaster, the Columban priest, who served as a curate for eight years in Mucklagh, Co Offaly and is now working in Fiji, said the tropical cyclone, which visited over 20-21 February badly damaged one Columban parish where Fr Nilton Iman is parish priest, assisted by Fr John Lee.

The three schools in the parish were extensively damaged. St Teresa School, Ba has lost four classrooms including the IT room and its computers.

The presbytery lost most of its windows. The Parish hall was used as an evacuation centre, sheltered a number of families.

Trees were uprooted all around the compound and one of them came down and crashed onto the roof of the lay missionary house which is also in the church compound.

The children’s dormitory and a few class rooms in Navala Catholic school were blown away.

The children from the dormitory are now billeted in the Church. The new two-storey classroom in Votua (built with Japanese aid recently) also lost its roof.

This school building is used as an evacuation centre for the villagers of Votua – in times like this and in times of flooding, which often occurs in Votua as the Ba River often burst its banks.

According to Fr McEvoy, “St Columban’s Church Votua was fairly badly damaged. Such a sad sight to see all these find buildings with just their walls remaining. The main sports stadium in the town ‘Govind Park’ also fell prey to the fury of Winston.”

He added, “To make things worse, all communications with Ba and everywhere else in Fiji was cut. We couldn’t contact them or they us – same with so many other people living in Suva – trying to contact their relatives and friends in the islands – even as I write there are areas and people that hasn’t yet been contacted.”

“It is so frustrating in this day and age of communications when this happens. Of course the reason is that all electric power lines were crippled and phone masks were blown down too.”

Donations for those affected by the cyclone will be very welcome and can be sent to St Columban’s, Dalgan Park Navan c/o Fr Pat Raleigh, Regional Director. All donations will be sent directly to the Columbans in Fiji for the attention of Fr Johnny McEvoy.