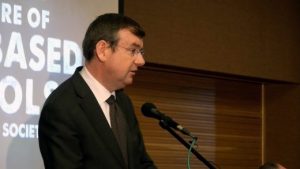 The Vice-Chancellor of St Mary’s University, Twickenham has said Irish citizens need to consider the very nature of what a republic is and what way the Irish Republic will move in its second century and the role religion will play in it.

Francis Campbell, the former British Ambassador to the Holy See (2005–2011) and Pakistan (2011–2013), made his comments after his address to the education conference, ‘The Future of Faith Based Schools in a Pluralist Society’, which was hosted by the Irish Catholic newspaper.

Speaking to CatholicIreland.net, he said he was making a comparative assessment with other republics, as there are different models and quite often it comes down to the role of religion.

“Religion is in many respects a lightning rod for a whole set of other issues,” he commented.

Acknowledging that the French model of a republic could be attractive to a certain set of opinions, Francis Campbell said this French republican tradition was “born out of a very unique particular historical evolution”.

He said that “If you import something like that into an Irish republican tradition you could end up with something that is not organic.”

He added, “It is not accident that we have this very extensive state supported faith-based sector” (in education) and he said he believed this was a legacy of the influence of the British system.

Asked about his suggestion in his address to the education conference that Catholic education needs to be re-embedded in the public square, Francis Campbell said it was important to recognise that it was not just about running or maintaining a Catholic school for the sake of a Catholic school.

“There is a much broader mission, which society also benefits from, and that is the plurality that faith-based or denominational-based education brings because you have a plurality of perspectives contributing to the liberal nature of society.”

He told CatholicIreland.net, “If you had a single uniformity in relation to the state alone providing education then that could lead really to a diminishing of a space and a set of ideas rather than an opening up of those ideas.”

He added that having a broad umbrella within society, with the state operating with basic minimum standards that different providers would have to reach, but allowing different philosophies of education to be part of that wider conversation in society, enriches society and democracy and contributes to a pluralist perspective.

Elsewhere in his address, the Vice-Chancellor of St Mary’s University, Twickenham warned that ‘the state pays so the state rules’ approach could become linked to a threat of depriving funds to faith-based schools – and could potentially lead to “a certain totalitarianism”.

Referring to the state’s takeover of faith schools in Quebec, he commented, “What I have warned about is the risk that if you have a very narrowly defined ‘state pays, state says’ approach, that can diminish the space in which democracies actually revolve around the expression of difference and the right to be different.”

He said the risk in the post-modern phase, especially in the West, as western countries struggle with complexity, is that “there could be a tendency to think let’s go for a minimalist common denominator approach, where we sort of marginalise every other provider so as to have a single state provider.”

He warned there was a risk that this could “erode the very difference and the right to be different that democracies revolve around”.

Read Francis Campbell’s full address to the conference on ‘The Future of Faith Based Schools in a Pluralist Society’, which was hosted by the Irish Catholic newspaper, at  http://www.irishcatholic.ie/article/embedding-catholic-education-public-square