Home > News > One of Ireland’s newest citizens thanks Church group

One of Ireland’s newest citizens thanks Church group 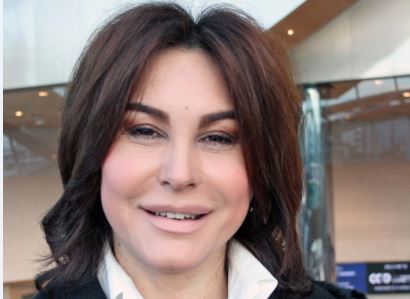 “When I got to Ireland I felt so welcomed and I had a feeling of being at home and the sense of looking forward to every day. The future finally opened up.”

On Monday, Julie Dusmetova became one of Ireland’s newest citizens. Originally from Uzbekistan, she came here in January 1998.

Speaking to CatholicIreland.net, Julie explained that “everything about the ceremony and becoming an Irish citizen is emotional for me because I was waiting for this for so long. The day I got the letter saying I was granted citizenship I just burst into tears.”

She is currently working for www.CatholicIreland.net and Church Services and pays tribute to the church group in helping her make her home here.

“I come in here every day with a smile. It’s the atmosphere and what we are doing. I am really blessed by the people around me, they all make it easier for me to be here. My life is in harmony now,” the forty-five-year-old mother of one explains.

Originally from the Uzbek capital, Tashkent, she had many friends there and describes her city and home country as multinational. Her friends were Ukrainian, Jews, Armenians, Russians, Georgian mainly. “But they all, when they had the chance, left the country. They couldn’t live there any more.”

She left when she was thirty. “Irish people do not realise how important for us who have come here it is to be able to build a new life and that we are equal and accepted. We are very grateful for everything the government does for us – it is absolutely appreciated.”

Her decision to leave Uzbekistan was “kind of desperation” and her life is “divided between before and now.” She has a degree in economics and finance from university in Tashkent and that has been recognised here.

The former USSR central Asian republic gained its independence in 1991. Positioned on the ancient Great Silk Road between Europe and Asia, majestic cities such as Bukhara and Samarkand, famed for their architectural opulence, once flourished as trade and cultural centres.

But the country’s leader, Islam Karimov, has been widely condemned for his authoritarianism and his regime tolerates no opposition, while political and civic rights are routinely flouted.

“It could be one of the richest countries in the world because we have everything: we have cotton, gas, and oil but because of the few – this is never going to happen.”

A hangover from the Soviet era is the heavily centralised economy. Its rich reserves of natural gas has meant that both Russia and Europe have sought closer ties despite the country’s appalling human rights record.

The lack of freedom, particularly religious freedom, initially under the Soviet Union and then under the regime of Islam Karimov, meant that there were restrictions placed on all citizens for attendance at church.

“Atheism was the atmosphere in Uzbekistan when I was growing up. We couldn’t be baptised but we all believed. I am a believer. But now my son is baptised and I am working in a church group. Everything that Catholicism brings I value and respect.”

However, her fourteen year-old son, who attends a catholic secondary school, is Irish born and he has been baptised. “I am so happy, it is such a different story for him and such a different life – the life I would probably love to have had myself – it is beautiful life.”

She explains that the process of becoming an Irish citizen was not difficult but she took a long time to decide to apply. “In the first years I was not daring to apply. I felt I don’t deserve it yet. I asked what did I do for this country. But over time I thought I have my Irish son now and I started working and I thought: I want to live like everybody in this country. You are my future – this is my home now.”

So she applied for citizenship in January 2013 and one year later is one of the country’s newest citizens.

Her son Denis is happy that she has become a citizen because “all of these years I couldn’t even travel abroad because I didn’t have a passport. My Uzbek passport was such as big issue. I couldn’t get it – the authorities make it impossible for you to renew it.”

Now she can visit her sister in America and she may even be able to return to see her Parents in Tashkent.

“I was hoping all these years to get some decent documents to go and visit my family and have some holidays with my son. Now I can visit my sister finally who lives in the US.”

“My parents still alive and every time that I talk to them my heart just breaks. It is terrible – the tension. My dad is working because there is no other way to survive. It could be tricky to visit them but we will find a way.”