Home > Featured > The Irish Church can learn much from Brazil 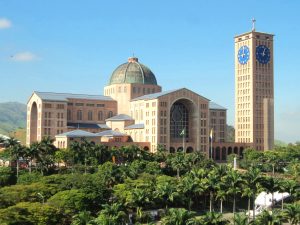 The Basilica of Our Lady of Aparecida, the world’s largest Marian shrine

Yesterday was a special day for Ireland’s Brazilian community, as not only was it the Feast of Our Lady of Aparecida, the national day of Brazil, it was also the 300th anniversary of the discovery of the miraculous statue in what is now a district of Sao Paolo.

Members of Dublin’s Brazilian Community celebrated the day with a gathering at Our Lady of the Angels Church, Church Street on Sunday afternoon.  More than a hundred young Brazilians meet at the Church regularly, but yesterday afternoon Archbishop Martin joined them and told them that the Irish Church would do well to follow their example.

“Yes, in the past Irish priests and religious went to Brazil as missionaries to evangelise,” the Archbishop said. “Today, we have much to learn from the Church in Brazil.  You as members of the Brazilian Catholic community have your special contribution to bring to the Church here in Ireland.”

Referring to recently published figures from the last national census, the Archbishop said that the CSO statistics showed ‘a significant drop in this country of those who consider themselves Catholic’.   The biggest drop was among young people, precisely the age group represented among the congregation of Brazilians gathered in the Capuchin Church.

“What has the Irish Church to learn from you?” he asked them. “It is not enough to attribute the decline in the numbers of young people who feel a bond with the Church to the growth in secularisation that is evident in most western countries.  It is also an indication of a failure of the Catholic Church in Ireland to win the hearts of young people.  The Catholic Church in Ireland lived under the impression that a Church that was strong in numbers and in social influence was really a Church that was strong.”

He continued, “Much of the discussion about renewal in the Irish Church has focussed on structures and on the role especially of priests and religious.  The crisis is not about numbers and structures but about faith and witness to faith.  None of our structures will survive if we do not find ways of witnessing to faith in Jesus Christ as something vital and attractive for the young men and women of our modern society.  The census results indicate that the Church in Ireland is not being successful in that.”

As part of the tri-centenary celebrations in Aparecida, Pope Francis travelled to Brazil earlier this year to visit what is now the world’s largest Marian shrine with a ‘minor basilica’ capable of holding 45,000 people. Speaking to the young people there, Pope Francis noted that amid the ‘uncertainties and insecurities’ of daily life ‘Mary is a sign of hope who will encourage you with missionary zeal’.

In Dublin, Archbishop Martin reminded the congregation of the story of the miraculous discovery of ‘Our Lady of Aparecida’ when a group of fishermen who had had no success, invoked the help of Our Lady and then their nets were filled almost at once. In the middle of their catch was a three foot tall clay statue of Our Lady, an image known ever since as ‘Our Lady of Aparecida’. 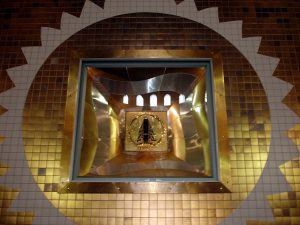 Pope Francis built on the story by asking the young people of Brazil to use the ‘nets’ in their lives – social networks, networks of friends, material and virtual networks – into something more meaningful: a community.

“Pope Francis called for the building of mission communities,” said Archbishop Martin. “He called them mission communities ‘on the move’, bringing the newness of the Gospel into society as the light and leaven of a more just and fraternal society. “We need such communities of young people to renew the Church.  I thank all those who work within the Brazilian Roman Catholic Community in Dublin for the work they do and I pray that the mission communities among Irish young people will be strengthen and encouraged by your example.”