“Irish Catholics have a special affection for the Columbans” – Archbishop Martin 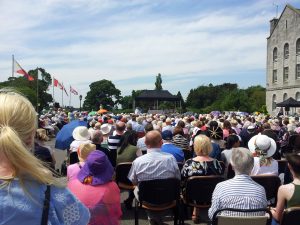 “Irish Catholics have a special affection for the Columbans and Dalgan Park, the home of the Columbans in Ireland, became a household name over the 100 years since the Society’s foundation in 1918, Archbishop Diarmuid Martin of Dublin said on Sunday.

At a Mass to celebrate 100 years of Columban mission, the Archbishop said Dalgan Park became a place of pilgrimage for leaders of the Church from different parts of the world who came to visit Ireland.

“The Church owes a debt of gratitude to this great tradition. The Church in Ireland has every reason be proud of this tradition,” he said.

He recalled how on 29 June 1918, the idea of setting-up a missionary society of Irish diocesan priests was approved by the Bishops of Ireland and what was then called the Maynooth Mission to China was born.

“One hundred years later, we gather to celebrate a century of mission of a Columban movement that has spread around the world and has undertaken new areas of activity. It has become a world-wide spiritual and missionary movement embracing priests, religious sisters and lay missionaries, inserted into a wider movement of individuals and families who support and are enriched by the Columban tradition.”

He told up to 2,000 people gathered in the grounds of Dalgan for the Missionary Society of St Columban’s ‘Family and Mission Day’, “You will find Columbans in many parts of the world. Yes, in China, but also in Korea, Burma, and the Philippines and in other parts of Asia, in Latin America and here in Europe. I think of the contribution of the Columbans to the coordination of Irish emigrant chaplaincy in Britain in the 1950s and 1960s”.

He also paid tribute to “the generous work of Columban priests and sisters in the parish of Balcurris in Ballymun”.

Dr Martin said the words he associated with the Columbans were mission and the poor.

“The Columban tradition has been one that embraces a unified mission of preaching the name of Jesus, caring for the poor and addressing the root causes of poverty and damage to God’s creation.” 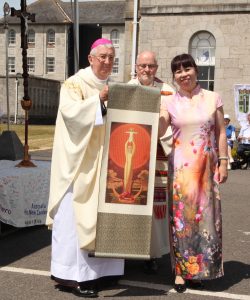 Acknowledging that Dalgan may have changed from the flourishing seminary it was at the time he entered the seminary in Dublin, he said it was home today to many retired priests who had given years and years of service.

“We are proud here today to remember their contribution. They have every reason to be proud of how they have won our recognition and affection for what they did.”

“As we look back over these hundred years, we think especially of those who gave their life in the service of the Gospel, especially those Irish priests listed among the Korean Martyrs.”

He said that in his reflection ahead of celebrating Sunday’s Family and Mission Mass in Dalgan, he kept asking himself what it was that in 1918 gave rise to this new vigour in the Irish missionary tradition.

“The Ireland of 1918 was a difficult and uncertain time. Our insecurity today about Brexit fades into the shade with the uncertainty and insecurity that existed in Ireland in June 1918. It was only two years after 1916. The horror of the First World War had not yet ended. Ireland was divided. Negotiations regarding future independence were underway but still uncertain. The possibility for the first time of a border on the island of Ireland lurked on the horizon. Economically, Ireland was at its poorest, both in urban and rural communities.”

“It is remarkable that at that moment a group of priests in Maynooth would have come up with such a far-seeing sense of what mission means. We have to learn the lesson that renewal in the Church comes when the Church rises above being locked within its own cares and rediscovers its call to reach out and be missionary.” 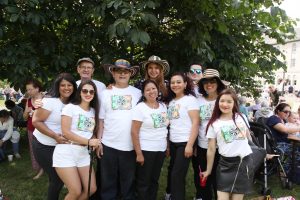 The Archbishop told the assembled Columbans priests, Sisters, lay missionaries, co-workers, family and supporters that the Columban tradition is not just one of not being trapped in the local but also of having the courage to reach out into the world of uncertainty and the unknown.

He said that today, “we have to come back to that sense of not being trapped in the crisis of the moment and dreaming again of an openness to being truly missionary disciples”.

“The message of Jesus is always a message that challenges us to rise above conformity.”

He concluded by noting the affection Irish Catholics have for the Columbans.

“One witness to that affection is the only writing we have from Matt Talbot. It was a handwritten – hand scribbled – note of a small donation from “a poor man Matthew Talbot”. That affection for the Columbans is still alive and well and is clearly visible here today,” the Archbishop said.