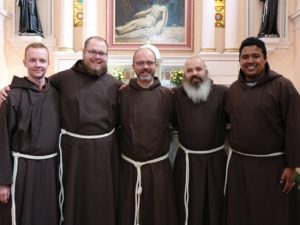 The Irish Capuchin Franciscan province this weekend welcomed four men into their novitiate at the Capuchin friary in Kilkenny.

The novices, Brothers Ade Green, CJ O’Dwyer, Jared Jamie and John Doone, were clothed during the ceremony for the first time in the well known brown Capuchin habit.

In his homily for the reception of the new Capuchins, novice master, Brother Sean Kelly described it was “A very proud moment for our two provinces of Ireland and Great Britain and Vice Province of South Africa and for the Order as a whole – truly a sign of God’s blessings upon us.”

He told the four new Brothers that the name ‘Friars Minor’ “So beautifully reflects the Franciscan charism. By it, every friar knows that he is to not merely serve the poor, but he must be the poor.”

He also warned them that they “are not called to be the social workers of the Church. Running the soup kitchens and the shelters. No! Although these are places to find friars at work, the friar is to be the lowest of the low. The servant of all. We must always strive to be at the lowest place. Like our Lord we must always kneel before all and become the foot washer of all humanity.”

Ade Green, who is a member of the Province of Great Britain, and John Doone and CJ O’Dwyer, who are both from the Irish Province, have been with the Capuchins as postulants since September 2015.

According to Brother Martin Bennett OFM Cap, “In that time they have come to know our way of life better and have greatly enriched our fraternity.”

They are joined in the novitiate by Jared Jamie, a novice from South Africa.

As postulants, the Brothers took part in a programme comprising of prayer, meditation, pastoral placements, personal development, human development as well as classes on Franciscan history and spirituality.

They were guided through this time by their Postulant Director, Brother Sean Kelly.

Brother Sean has now been appointed their novice master and will journey with them through the next year.

According to Brother Martin, “Noviciate is a very special time in which these young men will grow more deeply into relationship with God, each other, themselves and all of creation. It is a time of prayer, learning, reflection and brotherhood. It is a precious time; a gift from God.”