Yesterday was the Feast of St James and the holy day is being observed with a votive Mass at 10.30 a.m. at the church in Dublin 8 that is dedicated to the apostle and acts as headquarters for the Camino Society of Ireland.

During the Mass, a reflection on the meaning of pilgrimage will be given by Betty White, a Camino devotee. St James’s Church is next door to the Guinness brewery, which earns its St James’s Gate name from the fact that it is partly built on the site where pilgrims from Ireland left Dublin to travel to Santiago during the medieval period.

As part of observances marking yesterday’s feast day, a small group of pilgrims walked from Dunboyne, in Co Meath, to St James’s Church, via the Papal Cross in the Phoenix Park. After a prayer service with parish priest Fr Eugene Taafe, the group enjoyed a simple meal together sharing a Spanish omelette (or ‘tortilla’) and a Tarta de Santiago almond cake.

Speaking to CatholicIreland.net yesterday afternoon, Fr Taaffe said: “As I speak there is another group of pilgrims making their way here from Bray and they hope to be here in time to join us for Mass at 6.30.”

According to the parish priest, there is a small but growing number of Irish pilgrims making their way to Santiago de Compastella at present, now that travel restrictions have eased. This is despite the fact that Spain is not on the ‘green list’ of countries that the Irish government considers safe for people to visit. Indeed, the number of COVID-19 infections in Spain is starting to increase again, particularly in Galicia, the northern Spanish province where Santiago is located.

“I have two people due to call to the church to pick up pilgrim passports for a group of six who are about to head off to Spain,” said Fr Taaffe. “The number of pilgrims is starting to increase, but it is only a trickle.” 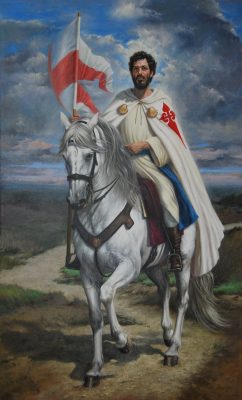 St James the Great as he was imagined as a Spanish liberator long ago!

A pilgrim passports, known in Spanish as a ‘compostella’, is a document used to collect stamps along the pilgrimage route to the shrine of St James in Spain to prove that one has walked a distance of over 100km to the shrine. Travelling this distance on foot, or 200km by bicycle or horse, entitles a pilgrim to receive the plenary indulgence accruing from visiting the shrine.

“This year the Mass of St James will be fairly low key,” said Fr Taaffe. “In the past, the church has been fairly busy for the Mass with the Spanish ambassador being among the congregation.”

St James is revered in Spain not only because his remains are said to be enshrined in Santiago, but because his intervention is believed to have helped secure victory for Christians against Moors in the mythical Battle of Clavijo. Indeed, in Spain, the saint was sometimes called ‘St James the Moor Slayer’!

Yesterday, Archbishop Eamon Martin of Armagh re-tweeted a fantastical picture of the apostle on horseback, which was originally posted on social media by Fr Hector Rick Fernandez with the caption ‘This is how the Spaniards imagine St James (Santiago) coming to evangelise Spain’.

On a more serious note, Archbishop Martin remembered his own pilgrimage to Santiago de Compostella last year, with the prayer “May St James guide us on our continued pilgrimage through life, and especially during this challenging time of coronavirus, COVID-19”.