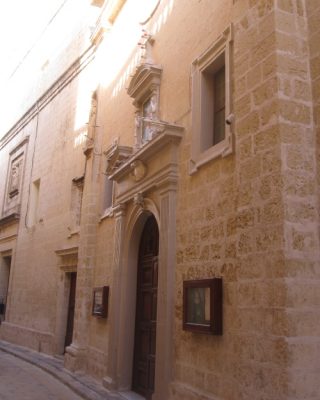 When Antoinette Moynihan began the Children of the Eucharist programme seven years ago, little did she realise how it would change her life. The ministry that grew out of the experience of offering Eucharistic Adoration to children during the Meath Diocesan Eucharistic Congress has now spread all over Ireland and to Scotland and England. This week it spreads to Malta.

Beginning yesterday (Monday) and continuing to Friday of this week, from 9.00 a.m. to 12.20 p.m., Antoinette and her colleague Helen will be teaching classes of children at St Albert the Great College.

In addition they will meet with other groups of children and young people in the afternoons. “May we humbly ask your prayers and intercession this week for the COTE mission in Malta,” she wrote in an email to the many supporters and volunteers of the group yesterday.

They will also lead 40 hours of Eucharistic Adoration from 3.00 p.m. this Friday until 11.00 a.m. on Sunday (7 April) at St Peter’s Monastery Chapel, Mdina (pictured).

Antoinette grew up in a family of faith in Kentstown, Co. Meath. She dreamed of being a nurse but her plans changed when she was offered full-time secretarial work. In 1991 she met Peadar Moynihan from Cork and they married. After the birth of her second child she became a stay-at-home mum. “I had faith in God, Our Lady and the Church but they were distant realities. Mass was a Sunday ritual,” she said.

It was a visit to Medjugorje in 2009 that lit a new flame. Antoinette came to an understanding that Jesus wanted her to do something connected to the Eucharist. On her return, she and Peadar began a monthly Divine Mercy prayer group. This led to their involvement in the ‘youth end’ of Eucharistic Adoration at the Meath congress. Six hundred young people participated that weekend in the prayer and adoration youth space. “I got an inkling of the powerful draw of Adoration for young people,” she said.

The following year at the International Eucharistic Conference (IEC), the couple again worked with youth adoration. Impelled by the IEC experience and supported by the Apostolate for Perpetual Eucharistic Adoration, Antoinette began the Children of the Eucharist programme, visiting schools around the country, where she would speak for an hour to First Communion classes about the real presence, Confession and Communion. She started with the local schools at Kentstown and Yellow Furze in Meath. From there the ministry grew organically across Ireland.

Working with children, Antoinette has devised a particular format that involves leading the children in prayer and song and sharing with them some stories from the Children’s Bible. The children also get to spend some time in silent personal prayer.

Now teams of over a hundred “faith-filled volunteer leaders” are bringing the COTE programme to schools and parishes all over Ireland and parts of Scotland and England.

“The main aim is for the children to develop their own personal relationship with the Lord,” Antoinette told an EWTN documentary. In the same programme, one little boy, Ethan Crimmins, shared the effect of adoration on him: “I would talk to Jesus and he would talk back to me about my family and say what I should do in life.”