Home > Featured > Irish-born bishop to head up Dicastery for Laity, Family and Life

Irish-born bishop to head up Dicastery for Laity, Family and Life 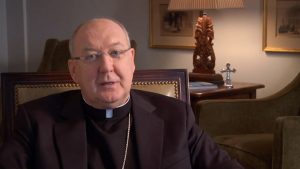 The Irish-born Bishop of Dallas has been appointed by Pope Francis as Prefect of the new Dicastery for Laity, the Family, and Life.

In a statement on Wednesday, Bishop Kevin Farrell said he was “extremely humbled” by Pope Francis’ decision.

“I look forward to being part of the important work of the universal Church in the promotion of the laity and the apostolate of the laity and for the pastoral care of the family in accordance with the Pope’s recent apostolic exhortation, Amoris Laetitia, the Joy of Love, and the support of human life,” he said.

Bishop Farrell also said he was experiencing “mixed emotions” about leaving the Diocese of Dallas which has been his home for 10 years.

He paid tribute to the “beautiful people and culture” of Dallas and the hard work and cooperation of the pastors, priests, diocesan staff and people of the city.

“Together, I believe we have accomplished many goals, and put others in motion, that will continue to build up the Catholic Church in North Texas,” he stated.

The Pope has also issued a motu proprio, Sedula Mater, formally establishing the new dicastery, which he had announced in June.

Born in Dublin in 1947, Fr Kevin Farrell was ordained a priest of the Legionaries of Christ in 1978.

Six years later he left the Legionaries and became a priest of the Archdiocese of Washington.

He is a brother of Bishop Brian Farrell, secretary of the Pontifical Council for Promoting Christian Unity, who also joined the Legionaries of Christ.

Pope St John Paul II named him auxiliary bishop of Washington in 2001, and Pope Benedict XVI appointed him bishop of Dallas in 2007.