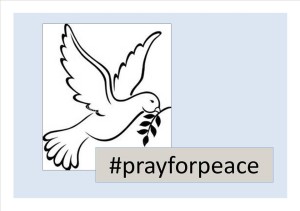 The Seanad is to be recalled to discuss the crises in Gaza and Ukraine.

As news emerged of the decision, the Bishops urged the faithful to avail of new prayer resources issued at the weekend in response to Pope Francis’ call for prayers for peace in the Middle East and Ukraine.

Speaking to CatholicIreland.net, Fr Robert McCabe of the Diocese of Meath said the prayers were distributed at the weekend and can continue to be used for as long as they are needed.

He urged people to place the prayers, which include the prayer of St Francis, a prayer by Cardinal Newman, and the prayer parents say with their children at night-time, on the fridge door.

He welcomed the Pope’s invitation to people to “defuse the violence of their tongues and in their hands.”

Prayer, he said, changes the hardness in people’s hearts.

He said friendships have been damaged by the ultimatum issued to Christians in Iraq to either convert, pay the tax or be killed.

“I am inviting people to think of how the friendships among moderates have been broken up – Christian and Muslim friends in Mosul.”

Fr McCabe reminded those Irish people going on holidays that they bring their suitcases knowing that on their return they will come back to their own homes, will unpack their clothes and get back to life as normal.

This, he said, contrasted with those made refugees by conflict.

“They mightn’t even have been able to bring a suitcase with them. They have got older parents whom they want to bring away with them. Some of them have been forced to flee to a refugee camp in Jordan or Lebanon leaving everything behind.”

“All this shows how vulnerable people are and how a dimension of prayer is necessary. It won’t change things but if political leaders see that people are making space for prayer for peace, then they know that at a diplomatic level they need to work on that as well. That is the essence of diplomacy – finding space and finding common ground.”

Fr Robert McCabe told CatholicIreland.net that he recommended that one of the prayers be said either at noon or six in the evening or as parents put their children to bed.

The prayers can be found here: http://bit.ly/1q6pNl9