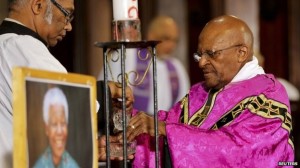 Archbishop Desmond Tutu, a friend of the late Nelson Mandela, prays before a picture of the former president of South Africa. Photo: Courtesy: BBC

The Primate of Ireland and the Chair of the Council for Justice and Peace of the Irish Episcopal Conference have both paid warm tributes to South African statesman, Nelson Mandela.

In a statement on Friday, Archbishop Diarmuid Martin of Dublin described Mr Mandela as “an extraordinary person and statesman.”

Speaking to CatholicIreland.net as he opened a conference in Dublin on Christian-Muslim Dialogue at Mater Dei, the Archbishop paid tribute to Nelson Mandela’s moral leadership which gave the people of South Africa the courage to move forward from apartheid.

He said he had brought about a huge transition in a difficult economic situation from the structured separation of people under apartheid.

The Archbishop met Nelson Mandela shortly after he was released from prison in 1990 as part of a church delegation.

“He was working out of two or three rooms in a rented building. He was there with Walter Sisulu, a friend of his in the ANC. The amazing thing was the simplicity of the setting – it was the simplicity which belongs to the great.”

As Mandela said his farewells to the delegation, he came over to Diarmuid Martin, even though he was the junior member of the delegation, and thanked him. “He was very pleased to know I was Irish.”

The Archbishop said Nelson Mandela’s message to Ireland today is that there is only one way to bring about harmony and collaboration and that is by “bringing people together and rising above the narrow and the tribal, in the negative sense.”

He told CatholicIreland.net that “Here in Ireland, we have to learn to understand one another, to appreciate one another and you can only do that if you want to come together.”

He cited the example of Nelson Mandela saying his great achievement was to teach all of us that there is only one way to respond to conflict and that is not revenge but to bring people together.

“In any conflict, it is those who rise above the narrow confines of their own group and reach out to others,” who helped bring about change he said.

On Friday, Bishop John McAreavey, Chair of the Council for Justice and Peace of the Irish Episcopal Conference, also issued a statement on the death of former South African President.

“In death, as in life, Nelson Mandela has united and inspired people across the world. The outpouring of grief and expressions of admiration that followed his passing are a testament to his extraordinary legacy.”

Bishop McAreavey said that through “courageous self-sacrifice” Mr Mandela led people to freedom in the fullest sense of the word – “the lasting, spiritual freedom that can only be achieved through reconciliation and forgiveness.”

“He was a true visionary and a powerful advocate for the need to engage in the harsh realities created by conflict in a spirit of truth, justice and human rights.”

The Bishop concluded by saying his thoughts and prayers are with the Mandela family and the people of South Africa at this time of mourning.

“May he rest in peace, and may his example continue to challenge and inspire all of us to make a real commitment to the work of justice and peace.”

Pope Francis was among the international leaders who paid tribute to Nelson Mandela.

In a telegram of condolence sent to the South African President Jacob Zuma, the Pope praised “the steadfast commitment shown by Nelson Mandela in promoting the human dignity of all the nation’s citizens and in forging a new South Africa built on the firm foundations of non-violence, reconciliation, and truth.”

The Pope said he prayed that the example set by Nelson Mandela “will inspire generations of South Africans to put justice and the common good at the forefront of their political aspirations.”