The Irish Catholic Bishops’ Conference has expressed solidarity and support for Christians, and to all who suffer and have been displaced due to violence in the Middle East.

Bishops said that to respect the dignity of the human person, all people of faith and goodwill need to be strong advocates for the protection of vulnerable minorities.

At the Winter 2016 General Meeting of the Irish Catholic Bishops’ Conference yesterday (7 December) in Saint Patrick’s College, Maynooth, the bishops discussed the focus of 27th Irish Inter-Church Meeting (IICM) on the plight of Christians in the Middle East, whose very existence is under threat.

In its concluding statement the Bishops’ Conference endorsed the final communiqué of the IICM which stated:

“Lasting peace and security for the region can only be achieved in the context of a renewed international commitment to solidarity, human rights and respect for diversity.

“As churches, we can play our part by keeping this issue on the agenda of our political leaders and ensuring that the victims of persecution are not forgotten, by making donations in support of the urgent humanitarian needs and by working to ensure that our society models the inclusive approach to minorities we would wish to see in the Middle East and throughout the world.” 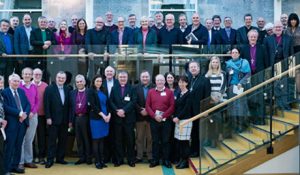 The IICM is the formal meeting between the Irish Catholic Bishops’ Conference and the Irish Council of Churches which allows for Christian churches in Ireland to pray and reflect together on issues of shared concern.

It includes senior church leaders and lay representatives from across 15 denominations in Ireland, ranging from Roman Catholic to Reformed, migrant-led, independent and Orthodox traditions. The theme chosen for the 2016 meeting was: ‘Forsaken? The suffering of the churches in the Middle East’.

The delegates stated: “As is reflected in the title ‘Forsaken?’ we approached this meeting with an uneasy conscience, concerned that we are not doing enough to demonstrate to our fellow Christians that they are not forgotten.”

They felt challenged by the scale of the suffering and the urgent need for a response from the international community, but recognised that the complexity of the problems mean there are few obvious, externally imposed solutions.

They were encouraged to hear that their spiritual solidarity in prayer and pilgrimage means a great deal to those who are experiencing persecution.

The work of Christian development organisations helps displaced people to rebuild their lives, in the hope of one day being able to return home.

Delegates were inspired and humbled by the courage of those who have risked everything to remain true to their faith.