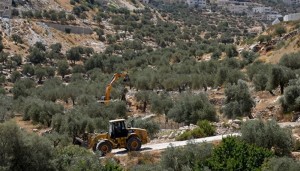 Bishop John McAreavey has sharply criticised the illegal settlements of Israelis on an area of the West Bank.

“The West Bank was intended to be a Palestinian area but settlers, some from Israel but many from America, are determined to create new facts on the ground and take as much territory of the West Bank as they can.”

This is happening on a scale that “is making the idea of a two state solution increasingly difficult,” he told CatholicIreland.net.

Bishop McAreavey was speaking on his return from a five-day visit to Bethlehem, Hebron, Gaza and the Cremisan Valley, (a stretch of fertile land on the border between the West Bank and Jerusalem) as part of a  delegation of Church leaders from ten countries – the Holy Land Coordination group.

He said the groups “invading” the West Bank area were “highly motivated and extremist”.

“They are anxious to push Palestinians off their land, whether it is houses, lands, farms or whatever.”

The bishop compared the settlements to the 16th century plantations in Ireland.

“The British planted people from England and Scotland in Ireland in order to control people in that part of the country and that is what is happening in the Holy Land.”

He described the 26 foot high “security wall” which cuts through the region, as “shocking”.

The wall does not mark the border between Israel and the West Bank, but cuts through farms and even a school in the West Bank region. 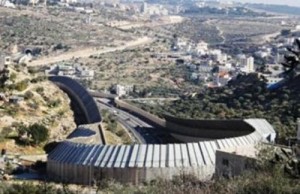 “People who have had ownership of the land, and title to it for generation find that in spite of court decisions for this [land grab] to stop, on a Monday morning, JCBs turn up and uproot ancient olive trees [on the other side of the wall]. If people [Palestinians] create problems, then the army comes in and blames them.”

Bishop McAreavey said the sense of despair among the Palestinian community was “tangible” because “there is a not a week when families are not leaving and heading off to relatives abroad in America or Chile.”

The Christian community was decimated and he warned that if the situation was not stopped, in years to come visitors to the Holy Land would find all the churches closed. “They will be museums.”

The Holy Land Coordination group was accompanied by representatives of the Irish aid agency Trócaire which is supporting a local NGO, the Society of St Yves.

This human rights group founded by the former Latin Patriarch of Jerusalem and the Holy Land, Michel Sabbah, provides fee legal assistance, counsel and advocacy to members of the community.

Bishop McAreavey noted that although the settlements were illegal, they were supported by the Israeli government.

“The army will be provided to protect them. They pay less tax and they get support for utilities that are made available.”

On the trip Bishop McAreavey spoke to the Irish government representative about Ireland recognising Palestine.

“It is government policy that the state of Palestine should be recognised but there are a lot of practical difficulties. In one sense it is almost a symbolic thing to do,” he said.

He went on, “The  reason why the state of Israel was set up was because Jewish people felt it was the only way in which their rights could be protected.”

Similarly the only way the rights of Palestinians could be protected was through a political recognition of their state.

“It seems a political thing, but in fact it is a pastoral response to a situation of terrible injustice.”

Referring to Pope Francis’ warning against the danger of a “globalisation of indifference”, Bishop McAreavey called on Irish people to familiarise themselves with what was happening in the Holy Land, “to care about it, to pray for the people there” and in any way they could to “support those groups committed to peace and to legal and constitutional change”.