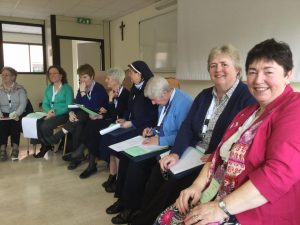 Participants including some Irish at the conference

There are waiting lists for men wishing to enter seminaries in some parts of the world. The challenges, such as encouraging vocations in Ireland, are not the same as elsewhere in the church around the world, Fr Alan Neville of the Missionaries of the Sacred Heart (MSC) told Catholicireland.net. “There needs to be a fundamental switch,” he said. “In Ireland we are so caught up with maintenance, (that) mission has dropped off the agenda altogether.”

He was among the dozen or more Irish delegates at the Vocations Congress in Rome. The 900 participants included lay people, religious, and priests. The message he took from the congress and its deliberations in advance of the Synod next year, is that youth ministry and vocations are interlinked.

“If we want to generate a culture of vocations, it is not going to happen in isolation, it is certainly not going to happen if we are not investing in youth ministry,” he explained. He said that young enthusiastic “switched on” Catholics do not grow on trees. “We’ve got to be engaging with the (youth) culture, meeting young people where they are and really listening. Because we say we are going to listen to young people and then often we talk at them, and then we tell them what we want done. Whereas the approach they were pushing here (at the congress), is of listening and dialogue.”

Vocations Ireland, Sisters of Mercy, Sisters of La Retraite, MSC, and diocesan priests, were among the several groups present from Ireland. Fr Alan Neville said that they hope to work more together in the future, and those present at the congress expressed a wish to bring teams of people together for specific events. 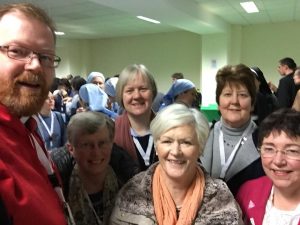 Fr Alan Neville and some of the participants in Rome

“We achieve so more together than we do apart,” he said. “There was a real sense of ‘we should be working on this as one’, because it is the one church.” He added that everyone has a vocation and all of us can help facilitate young people in finding their true vocation be that as married, single or in religious life. “When I say ‘all’ I don’t just mean diocesan or religious vocations directors, I mean you, me, parish priest everyone in the parish.” he said.

Addresses at the International Congress on Vocations came from a number of young religious in formation, looking at horizons and hopes for the future. Another session included vocations directors from five continents who spoke about how they reach out and accompany people exploring how God is calling them in life.

Speakers included H.E Joao Braz Card.de Aviz, and H.E. Jose Rodriguez Carballo, OFM, of the Congregation for Institutes of Consecrated Life and Societies of Apostolic Life; and Pascual Chavez Villanueva, SDB. The congress was held in advance of the Synod for Youth, Faith and Vocation.