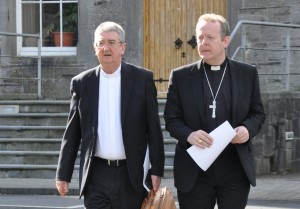 The Vatican’s press office announced on Wednesday that the Synod Fathers had elected chairpersons and moderators for their “circuli minores” or small discussion groups and that Archbishops Eamon Martin and Diarmuid Martin were among those given roles.

These circuli minores will function as language-specific discussion groups within the larger synodal gathering.

Thirteen groups were determined by language.

The groups began work on Wednesday morning on the first part of Instrumentum Laboris which outlines the context in which contemporary family life is lived.

Throughout the Synod, the circuli minores allow the participants to reflect on the basic text of the Instumentum Laboris (the working document of the Synod) in order to consider how the text can develop.

At the end of the sessions the rapporteur from each circulo presents a brief report of their work and indicates the supplements to be inserted in the base text.

On the third day of the synod, Vatican spokesman, Fr Federico Lombardi, was joined by Archbishops Charles Chaput of Philadelphia, Laurent Ulrich of Lille, and Salvador Piñeiro García-Calderón of Ayacucho o Huamanga of Peru.

Archbishop García-Calderón said the synod fathers had exchanged views and opinions among themselves in his Spanish-speaking group. He said the work happened in a “fraternal atmosphere” and that the bishops “think the same on many issues.”

Archbishop Charles Chaput gave some reflections on the recent World Congress of Families in Philadelphia.

He said that he was unsure of the impact the Congress would have on the Synod but that he did know it “had an impact on the Holy Father and a big impact on me.” 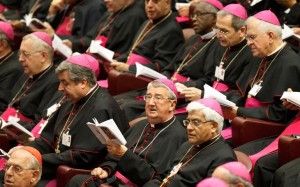 Archbishop Chaput said that the people who had come to Philadelphia, although chosen by their respective dioceses, celebrated “what the Church understands about family life.”

The Archbishop said there were roars of approval when people heard what the Church traditionally taught at the Congress.

“We must affirm the ninety-nine when we go looking for the one,” he said.

He added that it was good to have non-voting members in the working group, especially women, who helped the bishops come to a better understanding of family life.

Archbishop Ulrich explained that his group was made up of people speaking the same language but culturally very different.

“Just because we speak the same language does not mean we find agreement and therefore we have to discuss and harmonise.”

Archbishop Ulrich added that he found the atmosphere in the group conducive to work.

Chaput said that the issue of language was raised a number of times. He said the official English translation from Italian had to be carefully studied so that the bishops could be sure that it captured the sentiments of the original Italian document.

“There are serious issues we don’t understand, so this is a problem. We cannot vote if we do not know what we are voting for,” he said.

Questions were asked about how the Synod would use more sensitive language when talking about, for example, homosexual people.

Archbishop García-Calderón said the language of love must be spoken. Archbishop Chaput said he did not know how this would be done but that the Fathers had to be careful.

According to Fr Lombardi the interventions of prelates at the Synod were not being distributed by the press office.

He said that some of them are putting their papers on blogs and other websites and this was at their own discretion.

He said that the interventions of the married couples, present at the Synod, would be made available to the media.

Archbishop Chaput added that he has never been to a meeting where there is no lobby for a certain direction.

“That’s going on, I can assure you. That’s what happens when human beings get together. We shouldn’t be scandalised or surprised by that, as along as it is done upfront and honestly and not in a way that tries to win, rather than arrive at the truth.”