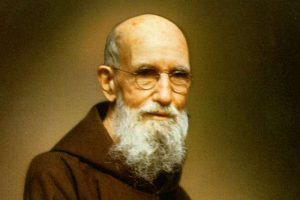 Ford Field Stadium, home of the Detroit Lions American Football Team, was packed to capacity, with more than 65,000 people present for the Beatification Mass celebrated by Cardinal Angelo Amato, Prefect of the Congregation for the Causes of Saints.

Revered for his holiness and believed to have been instrumental in obtaining many cures and blessings, Fr Solanus was declared ‘venerable’ by Saint Pope John Paul II in 1995.  The miracle that allowed for his beatification yesterday, involved the instantaneous cure of a Panamanian woman suffering from a chronic skin disease while praying at Fr Solanus’s tomb in the Chapel of St Bonaventure Monastery in 2012.

Born Bernard Francis Casey in 1870, on a farm in Wisconsin, the Capuchin priest was the sixth child of Bernard James Casey and Ellen Elizabeth Murphy’s 16 children. Bernard senior was from Castleblaney, Co Monaghan, and Ellen was from Camlough in Co Armagh. The young Bernard had a tough upbringing – at the age of eight, he contracted diphtheria, which permanently damaged his voice, but he was lucky, two of his siblings were killed by the disease.

Because his family moved home several times, his education suffered. His first jobs were as a lumberjack, then a hospital orderly, a prison guard and then a street car conductor. While working at Minnesota State Prison, he befriended former members of the Jesse James gang. But it was while working as a tram conductor that he first felt the call to religious life – he witnessed a sailor stab a woman to death, a brutal event that caused him to question the whole direction of life. He enrolled in the Milwaukee Archdiocesan Seminary, which at that time provided instruction in Latin and in German, neither of which Bernard Casey knew because of his poor education. He found the studies hard and because of this, he was told that he could not continue to ordination. However, some of his superiors felt he had a calling to religious life and Bernard was pointed in that direction.

While meditating before a statue of the Blessed Virgin on what he should do, he heard a voice saying ‘go to Detroit’ and as a result he applied to joint the Order of Friars Minor Capuchin at the St Bonaventura Monastery. His application was accepted and he was given the religious name Solanus, after St Francis Solanus, because both men loved the violin. As a novice, he struggled with his studies, so that when he was ordained in 1904 it was as a simplex priest with restrictions on his ministry.

He served for 20 years at two friaries in New York before returning to Detroit in 1924, where he mostly served in the St Bonaventure Monastery as a hall porter. But on Wednesday afternoons, he started to conduct services for the sick, where he not only gained recognition as an inspirational speaker, people started to consider him instrumental in cures of the sick and the obtaining of many other blessings.  He also became known among his fellow Capuchins for having a strong devotion to the Eucharist  — he would kneel, unmoving for many hours, before the Blessed Sacrament.  Among his confreres, he was also known as an accomplished violin player, particularly of Irish folk tunes, but his singing voice was lamentable and many of his fellow Franciscans chose to leave the room when it was his turn to perform a song! 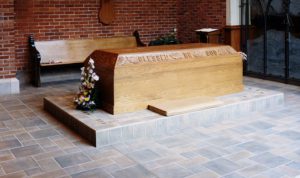 When he died in 1957, more than 20,000 people filed past his coffin and his reputation for holiness grew after his death. When his remains were exhumed and reinterred in a tomb outside the Fr Solanus Casey Centre at St Bonaventure Monastery, the remains were found to be largely incorrupt.

In a letter of congratulation sent to Archbishop Allen Vigneron of Detroit before the Beatification Mass, Archbishop Eamon Martin of Armagh wrote: “I want to express the joy of the Church in Ireland at the beatification in Detroit of Father Solanus Casey OFM Cap.  Father Solanus was the son of Irish emigrants, so his beatification today is also a moment of great pride in the faith of those who have passed on to us a trust and belief in Jesus Christ.

As the Universal Church marks the first World Day of the Poor tomorrow [Sunday November 19], it is entirely fitting that the Church commemorates a friar who was outstanding in the care of all of God’s people, especially those in particular need.  May I convey my good wishes to all who are gathered for the Beatification Mass, and please be assured of a special remembrance in prayer for the Archdiocese of Detroit.”