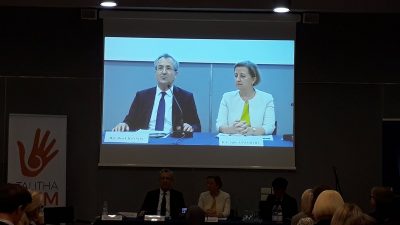 The Irish Ambassador to the Holy See has paid tribute to an international network of nuns who are working against human trafficking and prostitution.

Ambassador Derek Hannon was speaking after attending the panel discussion on Monday of the International Union of Superiors General (UISG), ‘Talitha Kum in Africa: Women Religious Leaders Against Modern Slavery’, on the efforts women religious are making against modern forms of slavery and human trafficking in Sub Saharan Africa.

Sr Gabriella Bottani, International Coordinator of Talitha Kum, was joined by Dr Flaminia Vola, of the Migrants and Refugees Section of the Dicastery for Integral Human Development, and by the Ambassadors of Ireland and the United Kingdom to the Holy See in the discussion.

The discussion was introduced by Sr Sally Hodgdon, CSJ, Vice President of the UISG.

She told those attending the discussion that Talitha Kum, a network of 22 networks of women religious in 76 countries, is making a difference.

“These Sisters offer the Advent spirit of hope – the hope of liberation to the victims of human trafficking and slavery. The Middle East and Africa are two areas of the world in which Talitha Kum concentrates the majority of its efforts,” she explained.

Ambassador Hannon described Talitha Kum’s work as “excellent” and “largely unsung”. He said the public’s attention should be brought to “this vital and occasionally dangerous work”.

The Ambassador also said it was work that the Irish government supported both morally and financially – to the tune of €36,000 since 2016.

Mr Hannon told delegates that “only through collaboration at international, regional, bi-lateral, and national levels will progress be made in combatting human trafficking, something that Talitha Kum has long understood”.

Sally Axworthy, Britain’s Ambassador to the Holy See, said she was grateful to Pope Francis for having kept the issue of human trafficking “on the front pages”.

She too praised the work of the Sisters, especially in their work of providing care and reintegration to victims.

“We know that they do that in a very different way, in a way that as governments we can’t do. And we pay tribute to that. It’s difficult work and we know that you do it very well.”

The British Ambassador ended her presentation saying that since the issue is a global one, the Catholic Church has a global presence particularly suitable to “reach people in a way that governments really can’t”.

Dr Flaminia Vola, representing the Holy See, gave an outline of pastoral guidelines currently in development within the Dicastery for Integral Human Development.

It is not only a crime, she said, it is also a grave sin, one that exploits the human person and strips him or her of identity.

To eliminate trafficking, society must change, because it exists due to a market responding to consumer demand. Dr Vola said there is a reluctance to recognise the phenomenon. This goes hand in hand with a general ignorance regarding its nature and how vast it is.

She stressed that collaboration between national and international organisations was necessary in order to bring human trafficking to an end.

Comboni Missionary Sr Gabriella Bottani has been the International Coordinator of Talitha Kum for four years.

During November she visited various Talitha Kum networks in Cameroon and Burkino Faso.

There she learned first hand from sisters involved in the network about their efforts to help victims of various forms of trafficking: forced labour (manual and domestic), sexual exploitation, forced marriage, child soldiers, forced begging and organ removal.

She said that Sisters are working directly with victims who want to return home once they have been released from traffickers in Libya.

Many of them, she said, still bear the wounds from the torture they endured.

Talitha Kum operates as a network with Sisters familiar with how things operate at the local level.

Its priorities are education, professional training (which includes scholarships for survivors of trafficking), social reintegration (including shelter), and networking with other governmental, public and religious organisations.

The name Talitha Kum comes from the Gospel. It is an Aramaic word that literally means ‘Wake up’.