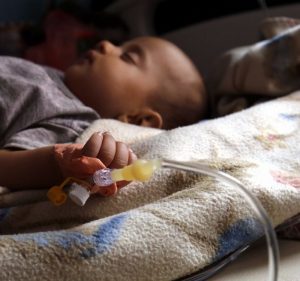 The total number of suspected cholera cases in Yemen this year hit the half a million mark last week, and according to an Irish aid worker it is expected to rise to 600,000 suspected cases by the end of the year.

“At the moment we have about 500,000 suspected cases with 2,000 fatalities, an average of 5 people dying a day,” said Irish Red Cross economic delegate Ciaran Cierans.

The two-year-old conflict between the Saudi-backed government and Shiite rebels has resulted in what is described as the “biggest humanitarian crisis on earth at the moment”.

The aid worker from Limerick, who has been in Yemen since October 2016, painted a horrifying picture of the situation in Yemen. Because of conflict, the sewage networks and many water treatment facilities have been destroyed, he told Newstalk yesterday. This has resulted in an overflow of sewage on the streets.

“As the country has no functioning governing body, the garbage hasn’t been collected from city streets in over ten months. So this is the breeding ground for the present diseases.”

The aid worker said that currently there were 3.2 million displaced people in Yemen and a further 20 million people in need of assistance like food, safe water and sanitation facilities. In addition, 14 million people need healthcare.

It is very, very difficult, he said. “What we’re finding tough is getting aid – either food or medicines – into the country because airports are closed. Ports are closed. At the moment we’re trying to bring aid and food through Oman and also the port of Aden in the south.”

In relation to the cholera epidemic, Mr Cierans said the Red Cross was providing “cash for work” to help clean up the streets and remove the rubbish. In addition, they are providing training to medical staff and treating people in high support treatment facilities. 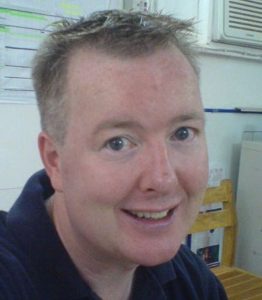 Yemen’s cholera epidemic, currently the largest in the world, spread rapidly due to deteriorating hygiene and sanitation conditions and disruptions to the water supply across the country.

“A collapsing health system is struggling to cope, with more than half of all health facilities closed due to damage, destruction or lack of funds. Shortages in medicines and supplies are persistent and widespread and 30,000 critical health workers have not been paid salaries in nearly a year,” said the World Health Organisation (WHO) in a recent statement addressing the crisis.

Cholera is a bacterial infection of the small intestine. The classic symptom is large amounts of watery diarrhoea that lasts a few days. The primary treatment is oral rehydration therapy – the replacement of fluids with slightly sweet and salty solutions. It is particularly dangerous for children. Severe cholera, without treatment, can kill up to half of the affected individuals, according to a 2004 Lancet report.

The public may contribute to the Irish Red Cross appeal for Yemen at www.redcross.ie/donate.

Unicef, Oxfam and Concern have also launched appeals for Yemen.