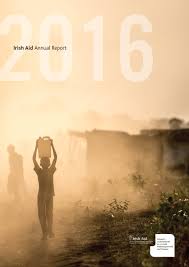 Ireland’s overseas development assistance (ODA) came to €724 million in 2016. €194 million was provided in humanitarian assistance in response to humanitarian need arising from conflict, natural disaster and migration, according to the 2016 Irish Aid Annual Report.

Minister for Foreign Affairs and Trade, Simon Coveney, T.D. said at the launch of the report, “2016 saw the scale of humanitarian need in the world reach record levels with over 130 million people in need of humanitarian assistance.  Ireland is committed to providing humanitarian assistance to ease the plight of civilians caught up in conflicts and natural disasters.” He explained that €25m went to helping those inside war torn Syria. €29m went to countries in the drought stricken Horn of Africa. “Our assistance is to help meet the immediate and most basic needs: food, clean water and shelter; and access to health care and education,” he said.

Minister of State for the Diaspora and International Development, Ciaran Cannon, who launched the report with Minister Coveney said, “We are working with governments in our partner countries to tackle climate change and food insecurity, and improve health and education services.”

Just two weeks ago Trócaire welcomed the Taoiseach Leo Varadkar’s assertion that the government is to increase Ireland’s overseas aid in Budget 2018. “Trócaire has recently made a submission on the upcoming Budget in which we map out how Ireland can meet its long standing commitment to providing 0.7pc of Gross National Income by 2025,” said  Éamonn Meehan, Executive Director, Trócaire. “The quality of Ireland’s aid is internationally renowned for its strong poverty reduction focus. We hope that October’s Budget will show progress on meeting this objective. Aid has been an important enabler of many of the world’s development success stories, such successes include the reduction of the child mortality rate in under 5s by half,” He added that increasing ODA is timely as humanitarian needs across the globe are at an unprecedented level. Since January 2017, the number of people needing humanitarian aid has risen by 12.5 million people to 141.1 million in 37 countries where natural disaster or conflict has destroyed lives.

• Ireland provides 0.33% of its GNP to ODA, as compared to the UN 0.7% target.
• €25 million was provided to the Syrian crisis in 2016, bringing the total support for the crisis to €67.5 million since 2012. Ireland helped those in besieged areas inside Syria assisting the Red Cross and UNICEF  to help refugee children access education through the No Lost Generation initiative.  Ireland aided the deployment of 43 Rapid Response Corps members to assist UN agencies working with Syrian refugees in the region.
• €29 million was provided to assist the Horn of Africa – communities in South Sudan, Sudan, Somalia, Ethiopia and Eritrea, coping with drought and conflict.
• Yemen’s escalating crisis saw 18.8 million people in need of assistance and Ireland provided over €4million. 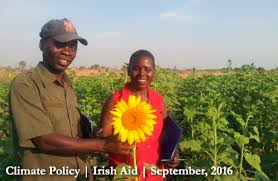 Ethiopia, Mozambique, Tanzania, Uganda and Malawi were Ireland’s top five recipient countries where: • Ethiopia reduced maternal mortality rates by 40% since 2011.
• Social protection services expanded in Mozambique to reach more than 430,000 households.
• In Tanzania, employment was created for over 10,000 farmers through an Irish Aid supported programme.
• New rates of HIV infection have dropped dramatically in Uganda almost halving since 2011.
• In Malawi, stunting in children has dropped by 10%, from 47% in 2010 to 37% in 2016.