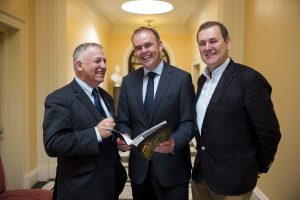 Prof Gerry Boyle, Director 0f Teagasc, with Joe McHugh TD, Minister of State at the Department of Arts, Heritage and Gaeltacht Affairs and the Department of Communications, Energy and Natural Resources, and Tom Kitt, Chairman of  Gorta-Self Help Africa, at the launch of IFIAD

Leading Irish development charities and agriculture experts have joined forces to fight hunger and poverty in the developing world.

Trócaire, Misean Cara, Gorta–Self Help Africa, Vita, and Concern Worldwide are among charities which, along with Irish agriculture and research experts, have formed the Irish Forum for International Agricultural Development (IFIAD).

“Bringing together Irish agricultural and development expertise in this way is a great opportunity for all of us. IFIAD will help us to collectively strengthen our partnerships and continue our work to eradicate hunger and poverty,” said Minister Joe McHugh, Minister of State at the Department of Arts, Heritage and Gaeltacht Affairs and the Department of Communications, Energy and Natural Resources with Special Responsibility for Gaeltacht Affairs and Natural Resources, at the launch.

He was among representatives from national and international agriculture, agri-business and development aid sectors. Other guest speakers included Dr Ousmane Badiane, Africa Director for the International Food Policy Research Institute (IFPRI) and Mr Paul Winters, Director of the Rome-based International Fund for Agricultural Development of the United Nations (IFAD).

Chief Executive of Gorta–Self Help Africa, Mr Ray Jordan, said that more than 70% of people in the developing world rely directly on farming for their survival.

“If even a fraction of the learning and successes of Irish agriculture would be transposed to Africa and other poorer regions, it would lift many millions of people out of extreme poverty,” he said.

Details of a successful trial in Eritrea, Africa, of an Irish potato variety were presented at the official launch of IFIAD at the RDS in Dublin last week. 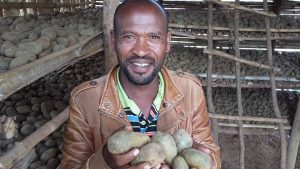 The initial potato trial involved 25 farmers who were supported in developing every aspect of production, from improving seed stock to enhancing pest and disease control and initiating market research. A national potato programme is planned to facilitate thousands of Eritrean farmers in growing the crop.

This potato programme came after Vita had worked for 12 years with the Eritrean Government, Irish Aid and the European Union to provide over 45,000 improved cookstoves as well as drip irrigation schemes, dams and water collection points. Tree planting helped to prevent soil erosion and provide fuel. All this was vital preparation for growing potatoes and other crops.

Potato programmes are more advanced in Ethiopia, where more than 3,000 farmers are involved. Many have built community potato stores to hold their crop during any glut, before selling when prices increase.

Vita has partnered with the Western Province of the Congregation of the Sisters of Mercy, Ireland, to work together in the region. They have attempted to alleviate poverty by promoting self-sufficiency in towns and villages such as Chencha, Ethiopia. They have supported communities in improving crop and livestock production and in generating off-farm income. 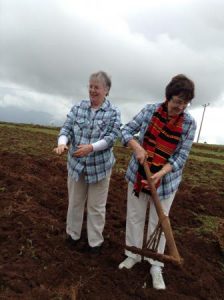 At the launch of the Vita–Mercy Project in 2009, Sr Elizabeth Manning, Provincial of the Sisters of Mercy, Western Province, said the partnership seemed to be a perfect match in terms of ideals and values.

“Traditionally personnel were sent out to mission fields including the African countries, and while personnel are still the most valued resource, it is a financial resource which allows this kind of project to happen and is the resource that will now work for us when we are no longer able to go to such places,” she said.