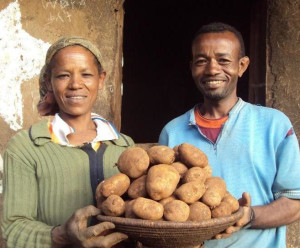 A project which will fund three Ethiopian PhD students and strengthen local Ethiopian farmers’ knowledge of sustainable potato production has been given a huge boost this week.

The Irish government’s agriculture and food research body and Arba Minch University have signed a Memorandum of Understanding (MOU) to facilitate formal and active collaboration.

Another MOU will be signed by the Teagasc Director which will formalise and build on the collaboration between Teagasc and the Ethiopian Institute of Agricultural Research (EIAR).

This pilot project and the training of PhD students is being implemented with an NGO called Vita in the Chencha region of Ethiopia.

Vita CEO, John Weakliam, paid tribute to Professor Boyle and Teagasc for facilitating the use of the world class capacity of Teagasc in research and education to address the constraints on sustainable food production and improved livelihoods in Africa.

Vita has long been a partner with the Western Province of the Congregation of the Sisters of Mercy, Ireland. Since 2009, the two organisations have been trying to alleviate poverty by promoting self-sufficiency in Chencha.

At the launch of the Vita-Mercy Project in 2009, Sr Elizabeth Manning, Provincial of the Sisters of Mercy, Western Province, said the partnership seemed to be a perfect match in terms of ideals and values.

“Traditionally personnel were sent out to mission fields including the African countries, and while personnel are still the most valued resource, it is a financial resource which allows this kind of project to happen and is the resource that will now work for us when we are no longer able to go to such places,” she said.

Ethiopia is one of the poorest countries in the world. 70% of the population lives on less than $2 a day.

The hunger crisis is compounded by harsh climate, erratic rainfall and drought which means that farmers cannot grow enough to feed their families or earn an income.

In 2012, a €5m Vita Potato Centre of Excellence was established to help increase the supply of food in African countries. It was launched by the Minister of Agriculture, Food and the Marine, Simon Coveney.

Local farmers take out a ‘loan’ of a bag of seed potatoes, which can be returned the next year alongside a donation of another bag, providing yet more farmers with seed for years to come. This process can enable millions to feed their families.

At that time, Teagasc helped in developing local research-advisory services as the body has done in Ireland. The current stage of the project, which involves funding and training three Ethiopian PhD students, will involve dissemination of their research which will help local subsistence farmers.

The research will ultimately be widely transferable across sub-Saharan Africa through a proposed potato coalition.

While in Ethiopia, he will be able to see firsthand the operation of the Vita pilot project on sustainable seed potato systems, and explore the role of research-led agricultural development in the Chencha region of Ethiopia.

Professor Boyle will also discuss the outcomes of the visit, as well as Teagasc’s new Policy on International Food Security, with the Irish Embassy in Addis Ababa.