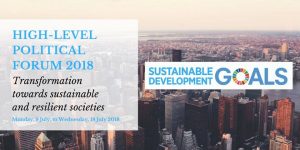 Ireland is falling behind on its commitment to implement the United Nations Sustainable Development Goals (SDGs), according to Coalition 2030, an alliance of over 100 Irish civil society organisations and networks.

The Coalition expressed concern in a report published as the Irish government prepared to present its first progress report on the SDGs at the United Nations in New York on Tuesday (17 July 2018).

In its own parallel report, Coalition 2030 acknowledged the role the Irish government played in getting global agreement on the SDGs and the progress it has made to date. However, Coalition 2030 warned that there are significant gaps in the government’s National Implementation Plan for the SDGs launched by Minister Denis Naughten in April (2018).

“Much greater urgency and political leadership will be required if we are to ensure the transformative change that the SDGs envisage by 2030,” said Suzanne Keatinge, CEO of Dóchas, the Irish association of non-governmental development organisations.

Speaking in New York she added: “The government needs to develop a realistic costing and prioritise targets and outcomes, but also involve all stakeholders, particularly civil society, in that process. Only then will we meet the ambition of the SDGs which is to make sure that the needs of the poorest and most marginalised in society, at home and abroad, are met sustainably and for future generations.”

As part of the government’s update to the UN, it presented its first Voluntary National Review (VNR) and attached a Compendium of Contributions from National Stakeholders in Ireland, including a submission from Misean Cara, which represents missionaries.

Misean Cara stated that Ireland acts strongly in the international community through Irish Aid, peacekeeping and disarmament efforts, but it must now dramatically increase the commitment, clarity and resources it devotes to achieving them.

“Ireland’s continuing failure to meet the UN target of spending 0.7% of Gross National Income on Official Development Assistance (or overseas aid) is also a strong concern: ODA was just 0.3% of GNI in 2017,” stated Misean Cara.

In its independent report, Coalition 2030 calls for greater focus on developing national policies to support the implementation of the SDGs.

“The greatest threat to Ireland’s implementation of the SDGs is a pronounced lack of policy coherence,” said Michael Ewing from the Environmental Pillar, an advocacy coalition of 29 Irish environmental NGOs. He highlighted Ireland’s poor performance in reducing greenhouse gas emissions and failure to stem “the downward spiral in Ireland’s biodiversity”.

The environment was also highlighted by Dr Sean Healy, CEO of Social Justice Ireland, who said that “Ireland’s performance on the Sustainable Development Goals is particularly bad on environment and inequalities.”

He said that government needs to put these SDGs at the centre of all policy formation.

“Much of what Ireland is doing is damaging people, the economy or the environment. Ireland needs much more committed action to build a future consistent with the SDGs,” he said.

Ivan Cooper, Director of Public Policy at The Wheel, the national association of charities said, “Dialogue with stakeholders is absolutely essential and we need everybody working together all the way from the State down to the grassroots movements if we are to achieve these goals.”

The 17 Sustainable Development Goals (SDGs), agreed by all states at the United Nations in September 2015, address many of the challenges at national and international levels including poverty, inequality and climate change.