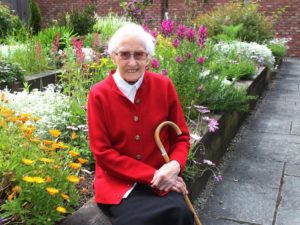 There was great sadness in Co. Limerick this week when Ireland’s oldest Mercy nun passed away aged 104. Wicklow native Sr Eileen Doyle lived at Mount St Vincent on O’Connell Avenue in Limerick City for a number of years. A member of the Mercy Order, she was a cousin of the Irish patriot Kevin Barry.

Sr Eileen was born on 22 July 1913 in Wicklow; she was only seven years old when her famous cousin Kevin Barry was the first Republican to be executed by the British since the leaders of the Easter Rising. He was 18. Barry, a medical student from Co. Carlow, was sentenced to death for his part in an Irish Volunteers’ operation which resulted in the deaths of three British soldiers.

Sr Eileen attributed her long life to always trying to be healthy. All her life, she said, she was always a “healthy little devil” and never had a serious illness. The second youngest in a family of nine, she outlived all her siblings. While Sr Eileen lived in Limerick for most of her life, she also lived in America for 11 years, teaching in Florida and in Mobile, Alabama in the 1970s. She was also the first principal of Ballynanty Primary school in Co. Limerick, and believed that hard work, prayer and eating lightly helped her live a long and healthy life.

She had resided at Mount St Vincent on O’Connell Street at the time of her 100th birthday in 2013 and was one of 19 nuns living there.

The Mercy order was established in Limerick in 1838, and the convent was built in 1861. However, in 2008 the dwindling numbers of sisters found that the convent was “too big and expensive to maintain” and Sr Eileen, along with the other sisters, offered the premises to projects they had a keen interest in, while a new modern living premises was built adjacent to the convent. Among those to benefit was Doras Luimní, a support group for all migrants living throughout the mid-west.

Speaking about her time as a nun, Sr Eileen told the Limerick Leader newspaper last month: “I worked hard. I think that kept me going. I eat lightly, but still I eat enough. I was 21 when I joined the Sisters of Mercy, after training in Mary Immaculate as a teacher and I entered the convent then. I think this is a good place to be now,” she said.

Looking back, she says that joining the nuns was the right decision for her. “I’m happier that I chose this way of life. I don’t know would I have been able to face all those problems that married people have.”